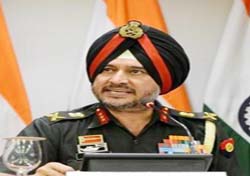 SRINAGAR: Lieutenant General Ranbir Singh, the General Officer Commanding in Chief of the Army’s Northern Command, visited the forward posts at Siachen Glacier, the highest battlefield in the world, today.

The Army Commander was briefed on the operational preparedness and the current situation, a defence spokesman said.

The GOC-in-C interacted with troops at the Siachen Base Camp and complimented the tenacious resolve, unstinting commitment of the ‘Siachen Warriors’ deployed in extreme harsh weather and inhospitable terrain, the spokesman said. (AGENCIES)