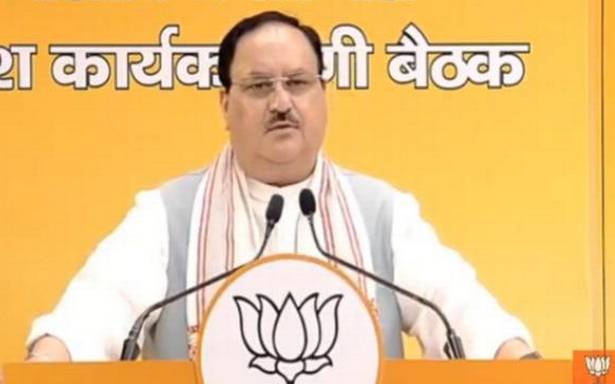 Branding the Congress party as “anti-national”, BJP president J P Nadda said on Tuesday said its leaders were praising Pakistan when an election is under way in India.
Nadda said since the main opposition party had nothing worth talking about the achievements of its past governments, it was busy extolling Pakistan.
So what do they do? Just this — When the election is on in Bihar, talk about Pakistan. What has Bihar election got to do with Pakistan? But Congress leaders are praising Pakistan. And who is leading them in this praise? Rahul Gandhi, Nadda told an election rally here.
Rahul Gandhi had on Friday targeted the Centre over IMF’s projection that the Indian economy is set to contract by a massive 10.3 per cent this year, saying it was another “solid achievement” of the government.
Gandhi had taken a swipe at the Government on Twitter by tagging a chart that showed IMF growth projections for 2020-21 for Bangladesh, Myanmar, Nepal, China, Bhutan, Pakistan, Sri Lanka, Afghanistan and India.
“Another solid achievement by the BJP government. Even Pakistan and Afghanistan handled Covid better than India,” Gandhi tweeted with the chart.
The BJP chief said the entire world, including the WHO Director General and the United Nations Secretary General, had lauded Prime Minister Narendra Modi for managing the COVID-19 crisis well in a country of 130 crore people.
But our Rahul Gandhi talks about Pakistans handling of COVID-19, Nadda said, and accused the former Congress president of “speaking the language of Pakistan and separatists”.
Nadda said Pakistan had used Gandhi’s criticism of the government to raise in the United Nations General Assembly bilateral issues like Jammu and Kashmir and Article 370.
He also assailed senior Congress leader P Chidambaram for his assertion that the party stood for restoration of Article 370 that bestowed special status on the erstwhile state of Jammu and Kashmir.
“Let alone restoration of Article 370, people will not leave you in a position to be in the opposition, what to talk of forming the Government. We know that well, he asserted. (PTI)