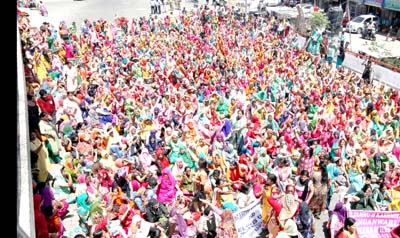 Excelsior Correspondent
JAMMU, Apr 23: More than 3,000 Anganwari workers, who have been on a strike for nearly three months in support of their demands which include release of their salaries and a hike in honorarium, today marched through the Jammu city and staged dharna near Dogra Chowk, thereby disrupting vehicular traffic for several hours.
Under the banner of All J&K Anganwari Workers and Helpers’ Union (AWHU), thousands of Anganwari workers and helpers drawn from various districts of Jammu province, this morning assembled near Press Club from where amid shouting of slogans against the Jammu and Kashmir Government and ruling alliance partners BJP and PDP, they marched towards Dogra Chowk, one of the busiest road inter-sections in the city, where they sat on a ‘dharna’, throwing the traffic out of gear.

Click here to watch video
The officers of police deployed in the area tried to persuade the workers to end their protest and lifted the blockade but they remain firm and disrupted the traffic movement for several hours.
Addressing the protesting workers, Suman Suri, president, AWHU, said that the Mission ICDS has become the biggest tool of gender discrimination and exploitation of women work force in post independence period. She alleged that Anganwari workers and helpers are being treated as bonded labourers in J&K.
“We are made to perform a host of duties like that of a health worker, pre-school teacher, doing surveys and making preparation of list of beneficiaries from 0 to 6 years children and lactating as well as pregnant women, immunization, referral services, etc but in turn a meager amount of Rs 3600 and Rs 1800 per month is being paid to Anganwari workers and helpers, respectively”, Suri said.
She said that ICDS Mission has become a tool of violation of human rights of women workers, who are worst victims of this State sponsored exploitation for past about 43 years. She requested all social organizations, NGOs and others working in the field of women emancipation to come forward in their support.
Suri hoped that voice of the Anganwari workers and helpers would reach to the ears of the Chief Minister after this protest and in the Cabinet meeting scheduled to be held tomorrow, she will approve our demands. She warned to intensify the protest if their demands were not met.
Besides demanding a hike in honorarium and release of their salaries, the association is seeking seniority list, implementation of the pension scheme and gratuity of Rs 2 lakh for Anganwari workers and Rs 1 lakh for helpers on their retirement.