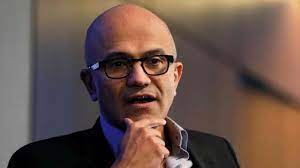 WASHINGTON, Dec 6: India’s Ambassador to the US, Taranjit Singh Sandhu, on Monday met Microsoft CEO Satya Nadella in Seattle during which they discussed the software giant’s work in India including in education, technology, healthcare and entrepreneurship sectors.
In October, Nadella, 55, was presented with the prestigious Padma Bhushan by India’s Consul General in San Francisco, Dr TV Nagendra Prasad. The CEO of Microsoft was named one of 17 awardees earlier this year.
“Discussed Microsoft’s work in India including in skilling, education, technology, healthcare and entrepreneurship sectors,” Sandhu said in a tweet following his meeting with Nadella at the Microsoft’s headquarters in Seattle.
Microsoft was a founding member of the Global Task Force on Pandemic Response and it did some great work during India’s Covid-19 crisis. Microsoft Teams is being used in virtual learning in many schools in India and the software giant also does skilling initiatives both for the labour force in the private sector as well as the public sector.
In November 2022, Microsoft and LinkedIn announced the “Skills for Jobs program” in India, providing free access to 350 courses and six new Career Essentials Certificates for six of the most in-demand jobs in the digital economy.
Notably Microsoft has also partnered with India’s Ministry of Skill Development & Entrepreneurship (MSDE) and Capacity Building Commission (CBC) to enhance the functional computer literacy of nearly 2.5 million Indian civil servants and help them provide efficient and effective citizen centric services.
In March 2022, Microsoft announced the launch of Microsoft for Startups Founders Hub, which will offer USD 300,000 worth of benefits and credits to startups, including free access to the technology, tools, and resources they need to build and run their business.
In April 2022, Microsoft unveiled two new initiatives to support Indian startups: Microsoft AI Innovate Season Two for software startups whose core applications or services are built using Artificial Intelligence (AI) technologies.
The initiative aims to help startups scale their operations, drive greater innovation, and build industry expertise by partnering closely with Microsoft’s engineering and product teams to build their core AI models, and Code Titans Hackathon, the hackathon for startups invites teams to turn their ideas into prototypes designed to solve challenges around business innovation, social entrepreneurship and sustainability.
On March 7 this year, Microsoft announced its intent to establish its latest data center region in Hyderabad. At the launch, Microsoft stated that establishing a fourth data center region in the country “is not just about investing in technology infrastructure. It’s about empowering every company and every sector in India to innovate, scale and benefit from the power of the trusted cloud”
In November, the US administration brought together partners from 36 countries, and the European Union (EU) for the second international Counter Ransomware Initiative (CRI) Summit. A group of 13 companies, including Microsoft, also participated in the summit for the first time Microsoft Cybersecurity Engagement Center, headquartered in Delhi, aims to foster deeper collaborations with public and private sector organizations to protect, detect, and respond to cybersecurity concerns. (PTI)