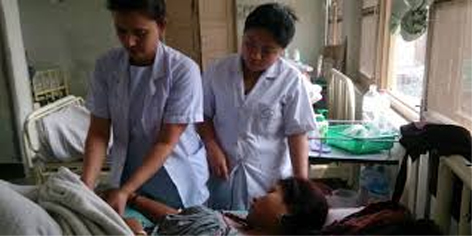 Our health workers are frontline soldiers fighting the coronavirus and it is but natural that they should be adequately and properly insulated lest they contract any infection. Since the virus hitherto unknown as to its form, shape, and behaviour hence called as ‘Novel’ has to be encountered with only under special protective cover used by the medical staff dealing with the disease in one or the other form. In other words, no part of the body of the health workers should be allowed to remain unprotected and not properly secured during active operations in quarantine and special care units meant for the infected people. It is, however, a cause of concern that most of such workers are reported to be working in an atmosphere of apprehensions and fear. That is primarily due to the fact that they are not getting protective gears like gloves, masks, goggles , special gowns and hand sanitizers . We feel the first aspect of the overall measures to fight the disease should have been full and cogent facilities in the shape of arranging protective cover for those who had directly to take on the vicissitudes of the dreaded virus. We feel the UT administration has lot to do in the matter which it should take note of though we cannot , at the moment , for obvious reasons, draw a pessimistic note on the issue by writing off all the efforts made by the administration so far.
We do not, however, say that the position is that bad but presumably due to short supply of such vital material, many frontline health workers are not getting the full protective cover. Had such a position been in some peripheral areas, we could have understood certain isolated reasons there for but even in Government Medical College Jammu , reports are that there are insufficient stocks of vital things like masks and sanitizers. Generally recommended N-95 brand masks are necessary for frontline workers but in most of the cases, they are provided with triple layer masks and surgical masks which generally are unsafe beyond 4 hours’ continuous use while N-95 masks can be used for more than 8 hours. N-95 masks are considered a better option in protecting the users from at least 95 percent of the small airborne particles. Not only this, most of the medical staff engaged with the onerous task of dealing with the diseased patients are to reuse the masks since they are not enough in the available stocks. We would not say that in the absence of proper protective cover, doctors, nurses and other concerned personnel should attend to such duties but whoever is or are doing their duties despite that and risking their own safety, deserve our appreciation and good wishes.
Respiratory masks are considered proper in such a scenario as they are designed to give protection from the virus when it is aerosolised such as during an intubation while surgical masks do not provide a ‘seal’ around the face . Expert opinion and administrative limitations are in constant conflict , perhaps , not disagreeing with the expert views but due to non availability of the proper and pointed masks, being a global phenomenon . Financial Commissioner, however, believes the position in the UT of Jammu and Kashmir, is comparatively better as compared to acute shortage of the vital things of protective mechanism in other countries. It is, however, providing some relief to learn that more than 10 lakh triple layer masks had been received in the last three days and more importantly, 10000 N-95 masks and eighty thousand bottles of hand sanitizers. Other required material too was claimed to be in the pipeline of being received.
The other ancillary factors, however, too have not be taken just casually as in matters of providing proper transport facilities to those medical staff members particularly who are asked to work in double shifts. During night duties, special administrative care and attention is needed in matters of arranging food , water , facilities for taking rest and transport facilities to ferry the staff from and to the spots where they are required to treat the patients.