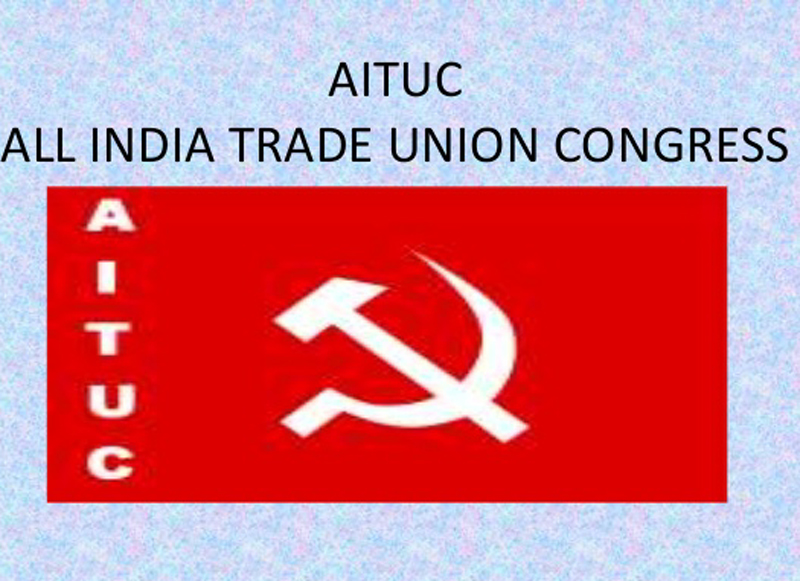 HYDERABAD, Oct 17:All India Trade Union Congress (AITUC) has extended its support and solidarity with the All India Bank Strike called by All India Bank Employees Association (AIBEA) and Bank Employees Federation of India (BEFI) on October 22.
AITUC General Secretary Amarjeet Kaur said “We note that All India Bank Employees Association and Bank Employees Federation of India have jointly given the call for All India Bank Strike on 22nd October, 2019 against the recent decision of the Central Government to merge 10 public sector banks into 4 Banks thus, deciding to close down 6 important nationalised Banks”.
AIBEA and BEFI decided to go on strike from 6.00 am on October 22 to 6.00 am on October 23 on demands like put a halt to Merger of Banks—Stop Banking Reforms— Ensure recovery of bad loans, take stringent action on defaulters—Stop harassing customers with penal charges and do not increase in service charges, Increase rate on Deposits— Stop attacks on Jobs and Jobs Security—and adequate recruitments in all the banks.
About 3.5 lakh employees in AIBEA and BEFI will take part in the strike.
Mrs Kaur said the Government’s decision is most unfortunate and totally unwarranted. All the Banks who now are facing closures namely Andhra Bank, Allahabad Bank Syndicate Bank, Corporation Bank, United Bank of India and Oriental Bank of Commerce are well performing Banks and have been greatly contributing for our nation’s economic development in their respective geographical areas.
All these Banks have a long history behind them and all of them have grown into big banks over the years. At a time, when Government is talking of including every citizen into banking access through scheme like Jan Dhan Yojana, etc., announcing the merger of 10 Banks will result in large scale closure of branches and deprive people of banking service is a most retrograde move, she added.
The AITUC General Secretary said, so far there is no evidence that previous mergers in SBI, Bank of Baroda, etc. have yielded any positive results. “This is not the time to experiment with merger of banks when Banks are required to play a crucial role in lifting the economy out of its present serious mess and crisis”.
In fact, the entire attention of Banks will now shift from efforts to recover the huge bad loans to tacking the problems arising out of mergers. This appears to be a deliberate move, since Government is unable to take any serious measures to recover the bad loans from the corporate defaulters except through huge write off, haircuts and concessions, Mrs Kaur added.
Stating that Bank mergers are “ill-timed” and “ill-motivated”, she said we appreciate the timely struggle of AIBEA and BEFI and support their All India Strike on October 22.
This struggle needs to be further continued and intensified as mergers are a prelude to privatise the Banks, Mrs Kaur maintained.
(UNI)