Excelsior Correspondent
SRINAGAR, Dec 3: Advisor to Lt Governor K K Sharma today convened a public grievances camp and gave on the spot directions to the concerned officials for speedy redressal of the issues being faced by the public.
Several public delegations, deputations and organizations met the Advisor and apprised him of their grievances, issues and demands and sought their early redressal.
A delegation from RMSA teachers demanded regularisation of their services as they have given their services in Education Department for the last 10 years. Another delegation of contractual teachers of School Education and 10+2 raised the issue of their regularisation.
A delegation of School Children Parents’ Association demanded that tuition fee structure and bus fee structure in private schools must be fixed. A deputation of JK Private Schools Association raised the issue of bus fee, tuition fee hike, registration process and other issues. A delegation of PHE employees raised the issue of regularisation of their services.
A delegation of retired JK Cement employees complained that they are not getting retirement benefits since their retirement. Retired employees of JKTDC demanded that their service benefits under 7th Pay Commission recommendations be released.
All PHE Land Donors Union demanded employment in government services. A delegation of Chanpora demanded construction of drain and macadamization of internal roads. A delegation of Welfare Committee Hamdaniya Colony Bemina demanded drainage system in their locality.
A deputation of JK tourism professionals demanded their employment under Rehabar-e-Sayahat scheme.
A deputation of Artisans demanded financial assistance to sustain their livelihood. A deputation of contractors’ association raised the issue of their pending payments with Simplex Infrastructure Limited.
A deputation of trained technicians (ITI) of PDD called for solving their stagnation issue and coming up with assured career progression. A delegation of PHE daily wagers demanded releasing of their wages/salary.
Several other deputations and individuals also raised various issues regarding their service issues, development of their areas and also related to PDD, PWD and Housing.
The Advisor discussed the issues on the spot with the concerned departments and directed prompt disposal of their grievances. He said that necessary instructions already stand conveyed to ensure that people get quality services and do not face any inconvenience. 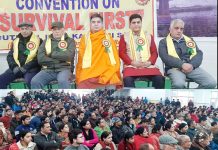