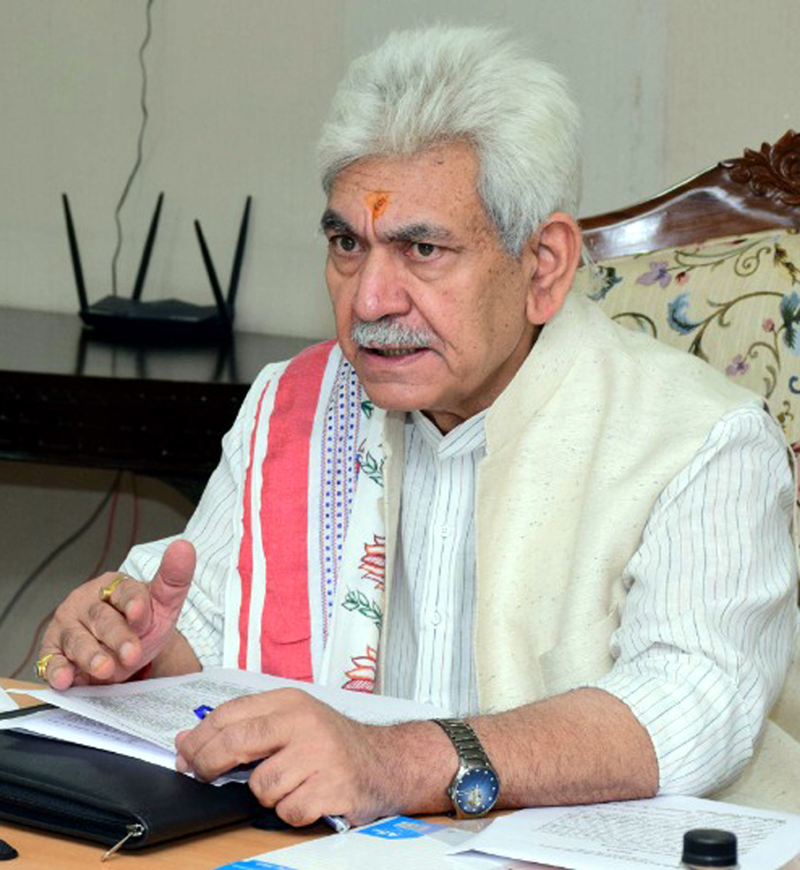 ‘Situation better what it used to be in past’

SRINAGAR, May 20: Lieutenant Governor Manoj Sinha today said the administration is committed to the security of Kashmiri Pandits living in the Valley and assured that their issues would be addressed.
Speaking to the reporters on the sidelines of the inauguration of “Flower Show-2022” at Botanical Garden here, he said that the Government will take care of the interests of Kashmiri Pandits including their security.
“I want to tell the Kashmiri Pandits that the administration will take care of their interests and we are committed to their security as well,” he said.
The LG said that people of Kashmir want that the tradition of mutual love between the two communities should persist.
“They are working here for a long time and the people of Kashmir also want the tradition of mutual love to persist. The Kashmiri pandits have to be patient and the issues which have been brought to my notice will surely be addressed,” he said.
Sinha said that the killing of Rahul Bhat is unfortunate, and in this regard, an SIT has been constituted. “Once the report is out, we will see to it further then,” he said.
The LG ensured security of all those who are being targeted. “Everybody, be it Kashmiri Pandits, outsiders, or any other individual, has a right to live securely and we are ensuring the same,” he said.
Sinha said that situation in Kashmir is better that what it used to be but there has been some recent incidents and to deal with such incidents a strategy is being formed.
“I can say that the situation is quite better than what it used to be in the past. However, in the last few months, there have been some incidents taking place, and to deal with that, we are framing a strategy,” he added.
Meanwhile, Sinha today interacted with the applicants of Jammu Kashmir Integrated Grievance Redress and Monitoring System (JKIGRAMS) and addressed their grievances during “LG’s Mulaqaat”- Live Public Grievance Hearing programme, at the Civil Secretariat.
He also gave on-spot directions for resolving the grievances of several applicants.
Emphasizing that administration being a service provider needs to develop, evolve and equip itself to fulfill people’s aspirations, Sinha directed officials to ensure effective and efficient response mechanism to serve people with total integrity, commitment and unflinching loyalty.
“Our grievance redress mechanism today is more resilient and accountable. Citizen is in the centre of governance and their complaints are being handled in fair, transparent and just manner. Regular orientation of staff from concerned department is being conducted by JK-IGRAMS,” he observed.
Taking serious note of the delay in issuance of RBA certificate to one Ruqaya Hassan of Ganderbal, Sinha directed Deputy Commissioner, Ganderbal to conduct a probe in the delay.
All Deputy Commissioners were further directed to submit the data regarding breach of predefined timelines under Public Service Guarantee Act while extending various public services and redressing grievances, within a week’s time.
While listening to the issue of Farooq Ahmad from Srinagar regarding the lack of playfield in his area, the Lt Governor directed the Deputy Commissioner to explore the possibility of finding a suitable place near the locality as per feasibility.
On the grievance of Girdhai Lal from Panchayat Makwal, Tehsil Ramkot of Kathua regarding the commissioning of a constructed Water Pump House in his area, Deputy Commissioner Kathua apprised the Lt Governor that the same shall be made functional in a time bound manner.
Responding to the grievance of Nizam Din regarding the issuance of ST certificate, the LG was informed that the certificate has already been issued. The applicant expressed his gratitude to the Lt Governor for receiving a prompt response from the authorities.
In another issue of availing a small business loan from the SC, ST and OBC Corporation, the applicant Suresh Kumar from Reasi informed that the issue was resolved within one month of filing the grievance on JK-IGRAMS.
The Lt Governor directed Commissioner/Secretary, Social Welfare Department, Sheetal Nanda to ensure hassle free processing of all such cases of business loans from SC, ST and OBC Corporation.
Similarly, on various other grievances that were presented in today’s LG’s Mulaqaat program, the concerned Deputy Commissioners apprised the Lt Governor of the status of the grievances.
Sinha while taking stock of the issues highlighted by public during the interactive programme directed the concerned officials to make the delivery of services easier and more expeditious. He also said modification in policies and procedures should be undertaken by concerned authorities to reduce the cause of grievances.
Rehana Batul Commissioner/Secretary, Public Grievances informed the LG about the progress and status of grievances received on JK-IGRAMS.
It was informed that more than 2,12,000 grievances have been received on the JK-IGRAMS so far, out of which 97% have been resolved.
Dr. Arun Kumar Mehta, Chief Secretary; Atal Dulloo, Additional Chief Secretary, Agriculture Production Department; R K Goyal, Additional Chief Secretary, Home Department; Nitishwar Kumar, Principal Secretary to Lt Governor, Administrative Secretaries; Divisional Commissioners, Deputy Commissioners, Superintendents of Police, Heads of the Departments, and other senior officers were present during the interaction, in person and through virtual mode.