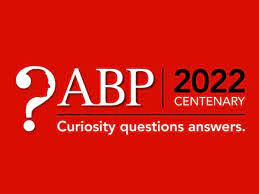 Panaji, May 6: Leading media house the ABP Group has unveiled its centenary logo as a part of a celebratory campaign during an event held here.
The Centenary logo was launched during the event – Goa Fest 2022 – organised by Advertising Agencies Association of India and The Advertising Club on Thursday.
“The logo of the centenary campaign is an interpretation of the concept that ‘Curiosity makes everything interesting’. Profoundly connected with the brand philosophy, the most striking visual element of ABP Group’s novel logo is its question mark motif, etched as a human face in reverse – a face that keeps changing with depictions,” said the company in a media statement released here.
The idea of using reverse or negative space within ABP’s centenary symbol captures the essence of human progress, which not just breathes to live but is curious to question, it added.
CEO of ABP Private Limited, Dhruba Mukherjee said that ABP Group’s centenary logo represented by the question mark emanates from the fact that curiosity makes everything in life interesting.
“While many forces illuminate ABP’s influence, an unflinching sense of curiosity permeates all the rest. As a result, more than being the sixth sense, this is probably the first for us – an inquisitive gene that drives the primal human need to know more,” he said.
Mukherjee said “we believe this iconic logo will best represent our brand identity across media, across different decades, and geographies. With that trust, we chose our centenary year for this excellent occasion to express and capture it once and for all.”
Avinash Pandey, CEO – ABP Network, said “A 100 years of curiosity is what built the ABP Group and through the course of that century we have always aspired to help shape thinking through insightful and credible content.”
He said that since inception, the name ABP has stood for content that is relevant and unbiased. As we step into the 2nd century of our existence, we look forward to keeping our legacy alive and are committed to work tirelessly to strengthen an informed and open society. (PTI)