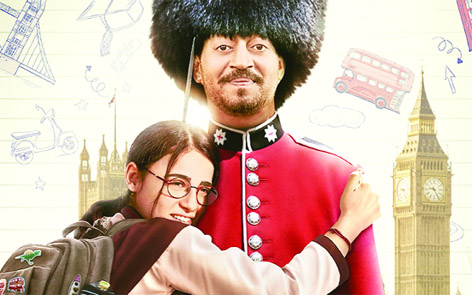 ANGREZI MEDIUM is the story of unconditional love between a father and daughter. Champak (Irrfan Khan) is a single parent of Tarika (Radhika Madan) and is based in Udaipur. His brother is Gopi (Deepak Dobriyal) and though both have lot of love for each other, they are also involved in a legal tussle. Both run a shop named Ghasiteram Sweets and both claim to be the original shop running since generations. The matter reaches court where Justice Chheda (Zakir Hussain) gives a verdict in favour of Gopi. In a drunken state, Gopi later reveals that he bribed the judge which is why he won the case. Gajju (Kiku Sharda), a friend of the brothers, records this statement. Tarika, meanwhile, is an average student and wishes to win the scholarship offered by her school that will take her to London. She works quite hard and manages to get 85% and it makes her eligible for UK scholarship. A felicitation ceremony is held for this occasion. The chief guest here is none other than Justice Chheda. Champak, in anger, informs the crowd of the nefarious activities of Chheda, not realising that Chheda is the husband of the Principal of the school (Meghna Malik). The Principal, in anger, cancels Tarika’s scholarship. Champak promises Tarika that come what may, he’ll get her admission done, that too in the college of her choice in London. Sadly, Tarika fails to get the admission from other quotas. Gopi suggests Champak that they contact Bablu (Ranvir Shorey), their childhood friend who is settled in London. Bablu comes to Udaipur on a plane ticket sponsored by Champak. He tells Champak that he can help him get British citizenship after which Tarika can get admission easily. Champak, Gopi and Tarika reach London airport. Here, Champak and Gopi are mistaken for drug dealers. They are deported back to India while Tarika is stranded in London. What happens next forms the rest of the film.
Bhavesh Mandalia, Gaurav Shukla, Vinay Chhawall and Sara Bodinar’s story sounds interesting on paper. Their screenplay, however, doesn’t live up to the expectations. While the writers get the father-daughter bond right, the other tracks aren’t convincing and arguably, not even necessary. Bhavesh Mandalia, Gaurav Shukla, Vinay Chhawall and Sara Bodinar’s dialogues are decent and a few one-liners are witty.
Homi Adajania’s direction is decent. He gets brownie points for the scenes involving Champak and Gopi as these scenes and their performances elevate the impact. Also the scenes of Champak and Tarika at some places will be loved. The Indian audiences, especially the middle aged and senior citizens, would connect with the message of children often leaving them after turning adults. On the flipside, the film has too many subplots that are difficult to digest. Audiences will find it strange that Champak and Gopi are business rivals and even fighting it out in the court. But at the same time, they even drink and hang out together like best of buddies. Not just that, Gopi doesn’t even mind when Champak leaks his video where the latter brags that he bribed the judge! The manner in which Champak and Gopi get deported over a misunderstanding seems stupid. Tarika, meanwhile, gets settled in London and finds a job and house, even before her admission is done. She doesn’t ask Champak even once how they’ll manage to procure funds. Also the track of Naina and her mother Mrs. Kohli (Dimple Kapadia) seem totally unwanted. Audiences never come to know why they are at loggerheads.
ANGREZI MEDIUM starts on an average note, depicting the life of Champak and Tarika, and also the feud between Champak and Gopi. The latter part seems bewildering though as their love-hate relationship. A few scenes here stand out like a drunken Tarika accusing Champak of being intoxicated, the madness at the court and at the school ceremony. The father-daughter bond touches viewers. The intermission point is unconvincing. Post-interval, the film drops at places thanks to too many confusing developments and too many subplots. Thankfully, a few genuinely novel moments stand out here like Tarika turning her T-shirt into a crop top to fit in among her new London friends, Gopi tying Champak to his bed and Champak and Gopi rescuing Mrs. Kohli and later singing Happy Birthday song for her. Also the finale might leave viewers teary eyed.
Talking of performances, Irrfan Khan delivers a top-notch performance. He seems completely in form and ensures that he makes audiences laugh and moist eyed. Deepak Dobriyal too is superb and his chemistry with Irrfan saves the film to a huge extent. Radhika Madan has a fine screen presence and gives a fine performance. Her dialogue delivery, however, is difficult to comprehend at few places. Kareena Kapoor Khan looks great but is underutilised and same goes for Dimple Kapadia. Ranvir Shorey gets some scope in the second half and excels. Pankaj Tripathi (Tony) tries too hard but manages to raise laughs. Kiku Sharda is dependable. Zakir Hussain, Meghna Malik, Manu Rishi (Bheluram), Ankit Bisht (Anmol) and Manish Gandhi (Advait) are fine. Tillotama Shome (Counsellor) leaves a mark and deserved more screen time.
On the whole, ANGREZI MEDIUM works only because of Irrfan Khan and Deepak Dobriyal’s chemistry and also due to some touching moments. At the box office, HINDI MEDIUM’s goodwill and Irrfan’s comeback will ensure decent footfalls for the movie over the weekend.
Courtesy : https://www.bollywoodhungama.com/