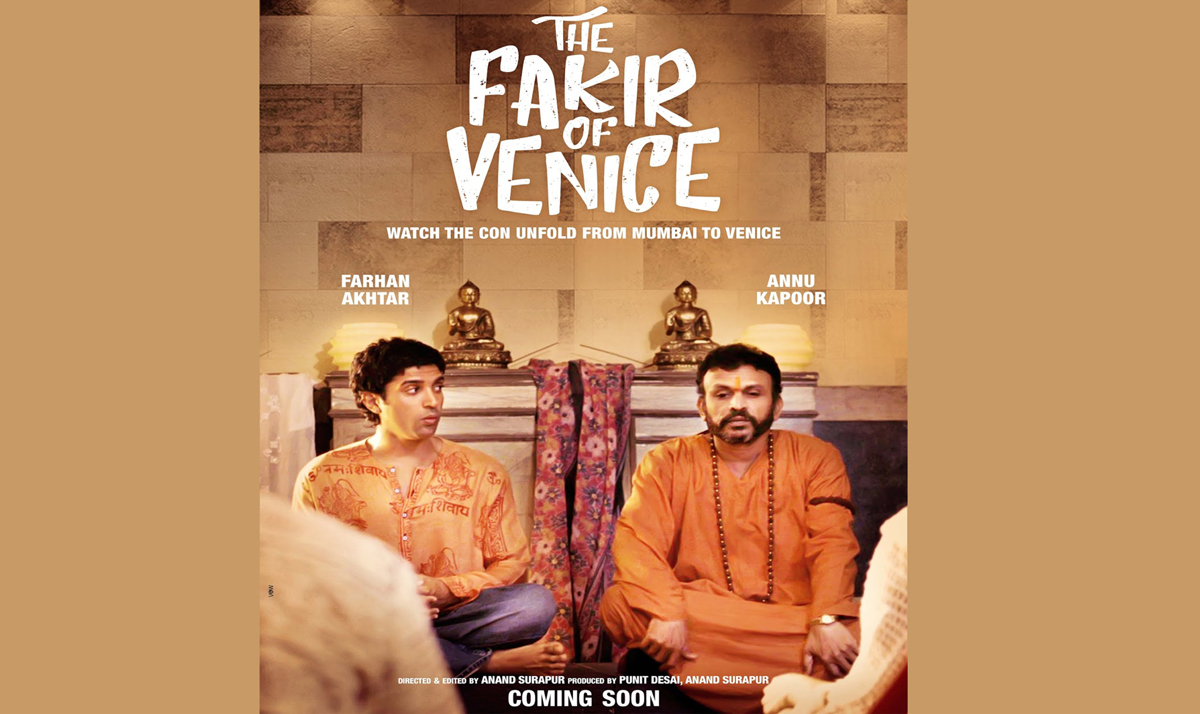 THE FAKIR OF VENICE is the story of an Indian fixer who has a life-changing experience. Adi Contractor (Farhan Akhtar) works in films as the production controller. His job is to ensure that the bizarre demands of the producers are met. He once manages to get a monkey from China as per the requirement of an urgent film shoot in the Himalayas near the border on the Indian side! He is based in Mumbai where his ex-girlfriend Mandira (Kamal Sidhu) and her colleague Avantika (Sushma Prakash) ask him to meet the requirement of a reputed art gallery in Venice. They are in search of a fakir or a sadhu who can be buried in the sand for hours and thus can awe the visitors. Adi takes up the offer and he sets off to Varanasi to find the fakir in question. But his search yields no results. After returning to Mumbai, he decides to meet Amin aka Goldtooth (Joginder Singh), who’s also a ‘jugaadu’ guy. Amin introduces Adi to Sattar Shaikh (Annu Kapoor), a poor and impoverished slum dweller who paints buildings for a living. Adi realizes that Sattar is apt for this job. Sattar too agrees since he realizes that he’ll be paid handsomely and he can give the money to his married sister Hamida (Jhilmil Hazrika) with whom he resides. Adi with the help of Mandira trains him to pretend to be a fakir and gives him the right clothes. Both then reach Venice and the madness begins. Visitors are awed to see Sattar being buried in the ground with just his hands protruding out. Adi meanwhile spins imaginary story about the extraordinary powers of the ‘fakir’. However, Sattar is fighting his set of demons and there’s a risk that it can expose their lies. What happens next forms the rest of the film.
Rajesh Devraj’s story is reportedly based on the life of filmmaker Homi Adajania, known for directing BEING CYRUS [2006], COCKTAIL [2012] and FINDING FANNY [2014]. The plot is interesting and if it was in the right hands, it could have made for a nice watch. Rajesh Devraj’s screenplay is a bit messy and fails to make the required impact. This is especially in the second half when Sattar’s issues come to the fore. But a few scenes here are unconvincing while the ones that are fine don’t really take the film to a high. Rajesh Devraj’s dialogues are simple but gets a little preachy. Also, Adi is narrating the film in English and such tactics would further reduce its box office prospects. A lot of dialogues have abuses which have been muted, courtesy the CBFC. Hence, it is difficult to comprehend some of the sentences muttered by the characters.
Anand Surapur’s direction is nothing great as he could have done a lot with the subject matter and characters. The dated feel further pulls down the film.
THE FAKIR OF VENICE begins on a fun note but the thrilling background score seems out of place. It soon becomes clear that the film has a film festival-feel and that it should be viewed in that regard. The film is just 98 minutes long and the first half is breezy and light-hearted and does engage viewers. However, the second half gets too heavy and bizarre. Sattar repeatedly waking up with a scream becomes repetitive. His entire dilemma could have been better explained. The scene where Sattar runs away from the hotel is quite over the top but does raise interest level. Moreover, he enters the same place where Adi is partying. Despite Sattar going berserk and rocking the show there, he doesn’t bump into Adi and the latter doesn’t even come to know that Sattar was present in the party. It seems difficult to digest since there weren’t too many people at the bash. Technically too, the film is not sound and the dated feel also kicks in at certain places. Although the film ends on a good note, it is too late in the day to make the desired impact.
Farhan Akhtar, as expected, looks quite young and reminds one of his style and appearance in his first two films – ROCK ON [2008] and LUCK BY CHANCE [2009]. And this look really suits him. Performance wise, he does a fine job, sans complaints. He’s playing a selfish guy and that side comes out very well. Also, one can feel that he’s dominating Sattar – this bit seems very convincing. Annu Kapoor is the soul of the film and saves it from becoming a disaster. Two scenes where he really was the best were when his sister bids him goodbye and his monologue at the beach. Kamal Sidhu is wasted. Valentina Carnelutti (Gia) has a crucial part in the second half and does well. Jhilmil Hazrika looks very authentic. Sushma Prakash, Joginder Singh and Mathieu Carrière (Massimo) are passable.
A R Rahman’s music makes no impact. The song ‘Wako Naam Fakir’ is played in the background and isn’t memorable. The background score is awkward at places and a bit too loud in a few scenes. Deepti Gupta, Preetha Jayaraman and Bakul Sharma’s cinematography is okay. Some hand-held and long shots look a bit off and fail to give the film a big-screen look. The colour correction also is not done correctly in a crucial scene. Susanna Codognato’s production design is decent. Anand Surapur’s editing is quite okay and bit haphazard.
On the whole, THE FAKIR OF VENICE boasts of an interesting plot and bravura performance by Annu Kapoor. But the flawed execution, festival-style narrative and most importantly the delayed release will go against the film heavily.
(Courtesy: https://www.bollywoodhungama.com/)