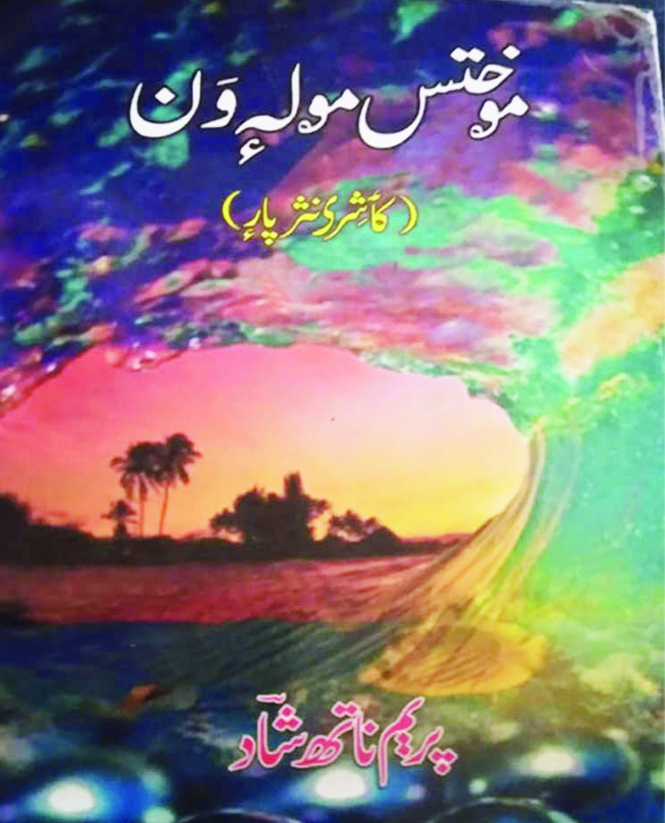 “Moukhtus Moulavun (Koshur Naserparae)
Author : Prem Nath Shad
A Review: Upender Ambardar
The book titled “Moukhtus Moulavun” (Koshur Naserparae),authored by the reputed Kashmiri poet Prem Nath Shad, spanning 124 pages is priced as Rs300.It is a compendium of different essays, written in nastaliq Kashmiri. It is divided into two parts, the first one devoted to Kashmiri cultural traditions and the second section exclusively centred on the distinguished personalities of Kashmir. The part one includes essays on the folklore, the mother tongue, vanvun, Leela, the Kashmiri music and the musical instruments, the Pandita ladies dress, Kashmiri riddles, the recollections (Chaetaevotur) and marsiya. Contrasting to it, the second part is wholly based on the acknowledged literary figures of Kashmir. Thoughtfully enough, the first write up is regarding the mother tongue Kashmiri. In it ,it is emphasised that Kashmiri language not only forms and consolidates one’s native identity but also links one with one’s indigenous social and cultural roots and moorings. The second topic is centred on the folklore. The folklore as we know, encompasses many strands ranging from the oral narratives, fables, legends, adages, folk dances to folk figures, each of which is a recognized folk artefact on it’s own. The reader also gets acquainted with folk genre’s ranging from the material lore, the verbal lore, the customary lore to the children’s lore etc. Kashmiri Vanavun is another theme touched by the author. Vanavun, as we know is a dazzling part of our cultural legacy, based on the oral traditions, running over centuries. It is vocalised on festivities of weddings and Mekhlaa as they continue to have mass appeal and emotional connect even upto the present times. The next topic covered is on the essence of kashmiri Leela, which is an inseparable part of our bhakti and devotional tradition.kashmiri Mousiqi tae Saaz constitutes another write up, included in the book. Kashmiri music, as we are aware, reflects a rich and timeless cultural legacy of Kashmir, which encompasses many popular components like Chakri, Rouf, Bach Nagma, Pathir, Ladishah and Veggi Nachun etc. The accompanying native musical instruments like Tumbhaknaer, Nout and Sornai etc, which help in widening the lyrical opulence and melodious nature of kashmiri music, also figures under the said topic. One more topic, included is titled as “Praech”,or kashmiri riddles, which form an enriching part of folk literary genre. The riddles continue to enjoy enormous popularity amongst children as they are not only thought provoking but also possess wisdom testing potential of the children.Under the next title of “Chaetavotur”,or the memory recall,the writer dwells upon the horrific happenings in the aftermath of Qabali raid of 1947 in the author’s native village of Qazibagh, Budgam. Marsiya, the kashmiri elegy or lamentations, an acknowledged genre of kashmiri literature also forms a part of the first part of the cited book. It’s evolving history and sustenance over the years has also been dwelt in the essay.
The second part of the book is personality oriented. It’s first thoughtfully included personality under the second section, is that of the famous bhakti poet and Saint Pt Krishnjoo Razdan, who is known for his spiritual powers and depth of devotional poetic brilliance. Abdul Ahad Azad’s poetry and his poetic genius as one of the forerunner of the modern movement in kashmiri poetry, figures in the second included write up. The next article is based on Amarshaheed Sarwanand Koul Premi, who was a multifaceted figure ranging from being a reputed poet,social reformer, translator, a journalist, a political activist cum freedom fighter to being an acknowledged teacher. Another topic is about Nishat Ansari, the noted poet and writer, whose writings have enriched the literary landscape of Kashmir. Fazil Kashmiri, the distinguished poet lyricist and a Sahatiya Academy awardee, who has used many genre’s for his poetic outpourings, figures in the next included essay. He is also known for his written Krishna Bhajans and leelas. Mohan Lal Aash, the noted kashmiri poet, writer ,historian and author of many books, also forms a part of the book. Another topic is on the literary contribution of famous kashmiri poet, Makhan Lal Kanwal ,whose writings have also added to the literary richness of the mother tongue. P.N.Kaul Sayil, the renowned poet and writer, famously known for his written Kashmiri Leelas and Bhajans, has been covered in the next essay. He was also a known calligrapher and stage artist and many of his written leelas received enormous acclaim in KP households. The famous poet and writer Jawaher Lal Saroor, whose range of writing varied from ghazals, nazams vatsoun, bhajans , children’s rhymes to essays forms the theme of another included write up.
The author of the cited book , Prem Nath Shad is a versatile poet and prose writer, who is known for his poetic expressiveness and lyrical skill. He can be rightly referred as a spoken word poet as his poetic outpourings enjoy outstanding appeal and acclaim due to the simplicity of the words used by him.Sh Shad though being a poet of ghazals,is also adept in other literary genre ranging from nazam ,vatchun, bhajans, leelas to essay writings.Many of his written songs have been put to music and have handsomely been received by a vast multitude of listener’s .One of his written praise of mother song “Maej chaie aekhir maej aasaan…”has become an all round hit as it’s emotionally packed word’s touch the deepest strings of the listener’s heart. Sh Prem Nath Shad is also an expert in Vanvun singing, even though, “Henzaay”, is exclusively a feminine forte. He has even guided many in this art of heritage singing.
In a plain speak, the book under review, titled as “Mokhtus Moulavun “, authored by Prem Nath Shad makes an absorbing and pleasing reading.