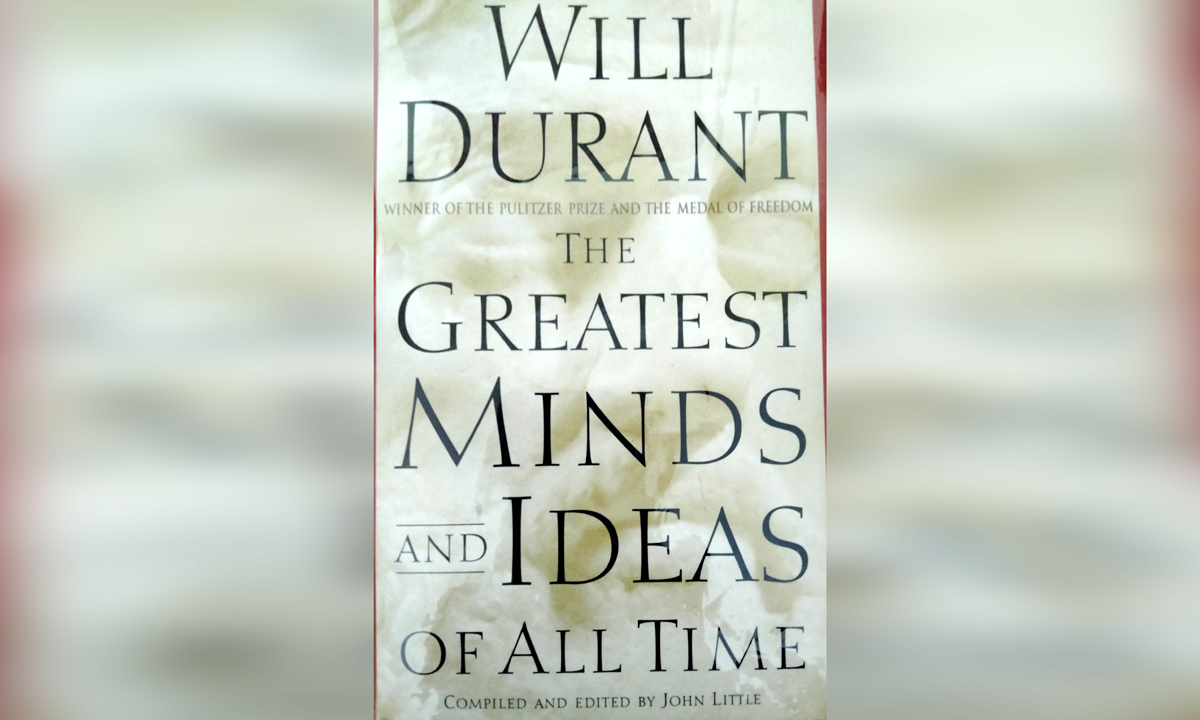 The greatest minds and ideas of all time
Essays by Will Durant
Compiled and Edited by John Little
Simon and Schuster, India
Pages 127, Hard Cover, INR 499

It was a happy chance that I bought this book. Actually, I had set my heart on Asimov’s Chronology of Science and Discovery. But that tome of 800 pages seemed a trifle heavy, both for my pocket and my patience. Poor pensioner me.
I settled instead for The Greatest Minds… Coming from a lesser mortal, the title would have sounded pretentious. But Will Durant (1885-1981) is another proposition altogether. His universally hailed The Story of Philosophy(1926) is said to have made its publishers a global presence. He devoted half a century writing the eleven-volume The Story of Civilization. Through his wide learning and delectable style, the savant brought such an arcane subject as Philosophy within the easy reach of lay readers, and left them asking for more. Among the honours and awards showered on him were the Pulitzer Prize (1968) and the US President’s Medal of Freedom.
The Greatest Minds… has half a dozen essays in all, as also a brief introduction by John Little. The first of the essays comes forth as the author’s own prelude to what is to follow. Self-deprecatingly titled A Shameless Worship of Heroes, this 3-page piece convincingly establishes Will Durant’s firm belief in the prime importance of great men in making this world what it is. ‘(The history of the world) is properly the history of its great men,’ he asserts. The order of the succeeding essays is in full accord with the tone set by the first: The Ten “Greatest” Thinkers, The Ten “Greatest” Poets, The One Hundred “Best” Books for An Education, The Ten “Peaks” of Human Progress,and lastly,Twelve Vital Dates in the World History.Mark the use of quotation marks that enclose the superlatives ‘the greatest’, ‘the best’ and ‘the peaks’. The philosopher in Will Durant was wary of the risk of contrariness he was taking. The assertions made in the essays are his, and his alone. You and I are free to disagree with him. That by itself makes the slim volume an exciting challenge to meet.
The gentle, one must say avuncular, voice of the author adds to the charm of the book. Talking of the books of his choice in Chapter 4, he devotes almost a thousand words (pages 64-66) to create an ‘atmosphere’ for the prospective readers. Here is his putative library ‘…spacious and dark and cool, safe from alien lights and sounds, with slender casements opening on quiet fields, voluptuous chairs inviting communion and reverie…’ and so on. An astute philosopher that he is, Will Durant never wavers from his main objective, which is to take his readers to ‘another world, containing the selected excellence of a hundred generations; not quite so fair and vital as the actual world of nature and human enterprise, but abounding nevertheless in unsuspecting wisdom and beauty unexplored.’
A word of caution, nonetheless. India and Indians like Buddha and Tagore and Gandhi do find a place in the book, but scarcely so. The Vedas, the Upnishads, even the Gita have been given a miss. Do not feel hurt. Philosophy abhors narrow nationalism. Secondly, since Will Durant passed away forty years ago, readers of the present generation may find some of his averments hard to digest, if not dated. For instance, in Chapter Five, which is about ‘the peaks’ of human progress, the omission of Artificial Intelligence (IA) would seem glaring, especially to the thirty-year olds and the younger lot. Then, doesn’t the tag ‘of all time’ in the title appear dismissive of the progress the world has made practically in every field since Will Durant’s demise? Perhaps John Little, who has compiled and edited the essays, could in his Introduction have seen to such not so insignificant flaws.
Even so, one would like to say, in the manner of Lord Bacon, that The Greatest Minds and Ideas of All Time is a book ‘that is to be chewed and digested.’