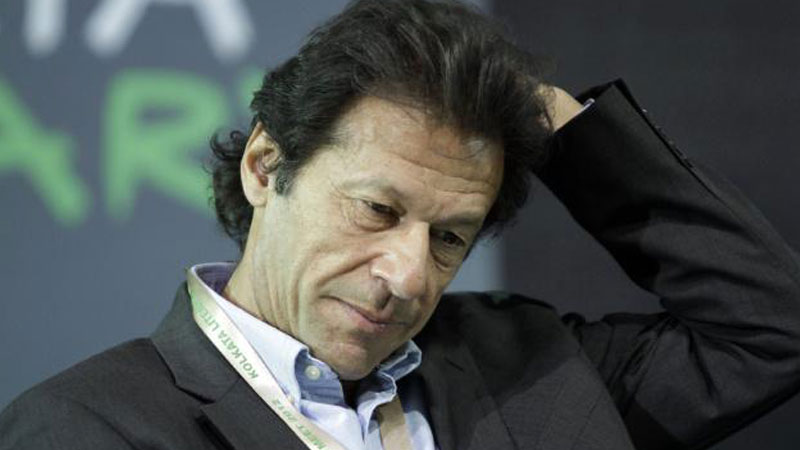 WASHINGTON, July 24: Prime Minister Imran Khan has admitted that about 30,000-40,000 “armed people”, who have been trained and fought in some part of Afghanistan or Kashmir, were in Pakistan and accused the previous Governments of not telling the truth to the US about the militant groups operating in the country.
India and Afghanistan accuse Pakistan of providing safe haven to the Afghan Taliban, the Haqqani network, Jaish-e-Mohammed, Lashkar-e-Toiba and other militant groups, which carry out attacks in the two countries.

Khan, who is on a three-day official visit to the US, also admitted to American lawmakers that successive Governments in Pakistan did not tell the truth to the United States, in particular during the last 15 years, that there were 40 different militant groups operating in his country.
“Until we came into power, the Governments did not have the political will, because when you talk about militant groups, we still have about 30,000-40,000 armed people who have been trained and fought in some part of Afghanistan or Kashmir,” Khan said during his appearance at the US Institute of Peace, a US-Congress funded think-tank, on Tuesday.
“There was a watershed in Pakistani politics. In 2014, the Pakistani Taliban slaughtered 150 school children at Army Public School (in Peshawar). All the political parties signed the National Action Plan and we all decided after that, that we will not allow any militant groups to operate inside Pakistan,” he said.
Khan said it is in the interest of Pakistan that “we do not allow any armed militant groups to operate” in our country.
“We are the first Government that has started disarming militant groups. This is the first time it’s happening. We’ve taken over their institutes, their seminaries. We have administrators there,” said Khan, whose Pakistan Tehreek-e-Insaaf party formed its first Federal Government in August last year.
“So it is for the first time in Pakistan that we have decided that there will be no armed militias in our country,” he added.
The Khan Government has taken control of the Jamat-ud-Dawah (JuD) and its charity wing the Falah-e-Insaniat Foundation (FIF) properties including seminaries and mosques across the country following international pressure built up after the deadly Pulwama attack on February 14. According to officials, JuD’s network includes 300 seminaries and schools, hospitals, a publishing house and ambulance service.
The JuD is believed to be the front organisation for the LeT which is responsible for carrying out the 2008 Mumbai attacks that killed 166 people, including Americans.
“We were fighting the US war on terror. Pakistan has nothing to do with 9/11 (attack). Al-Qaeda was in Afghanistan. There were no militant Taliban in Pakistan. But we joined the US war. Unfortunately, when things went wrong, where I blame my Government, we did not tell the US exactly the truth on the ground,” Khan said while speaking at another event later.
Addressing a Capitol Hill reception hosted by Congresswoman Sheila Jackson Lee, Chairperson of the Congressional Pakistan Caucus, Khan said, “There were 40 different militant groups operating within Pakistan. So Pakistan went through a period where people like us were worried about could we survive it.”
“So, while the US expected us to do more and help the US win the war (in Afghanistan), Pakistan at that time was fighting for its own existence,” he said.
Part of the reason for this, Khan explained to the lawmakers, was that the Pakistani Governments were not in control.
Khan said it was very important that he met President Donald Trump and other top American leaders.
“We have explained to them that the way forward is: number one, the relationship has to be based on mutual trust,” he said, adding that he would be honest in telling the US what Pakistan could do in the Afghan peace process.
Khan has said he will reach out to the Taliban to try to convince them to open negotiations with the Afghan Government. The Taliban have so far refused to talk directly to the Afghan Government.
“So far, we have done pretty well,” he said and cautioned the US that the peace process was not going to be easy.
“Do not expect this to be easy, because it is a very complicated situation in Afghanistan. But rest assured, we would be trying our best. The whole country is standing behind me. The Pakistan army, the security forces, all are behind me. We all have one objective and it is exactly the same objective as the US, which is to have a peaceful solution as quickly as possible in Afghanistan,” Khan said.
The Trump administration has intensified its efforts to seek a negotiated settlement of America’s longest war in Afghanistan where the US has lost over 2,400 soldiers since late 2001, when it invaded the country after the 9/11 terror attacks. (PTI)