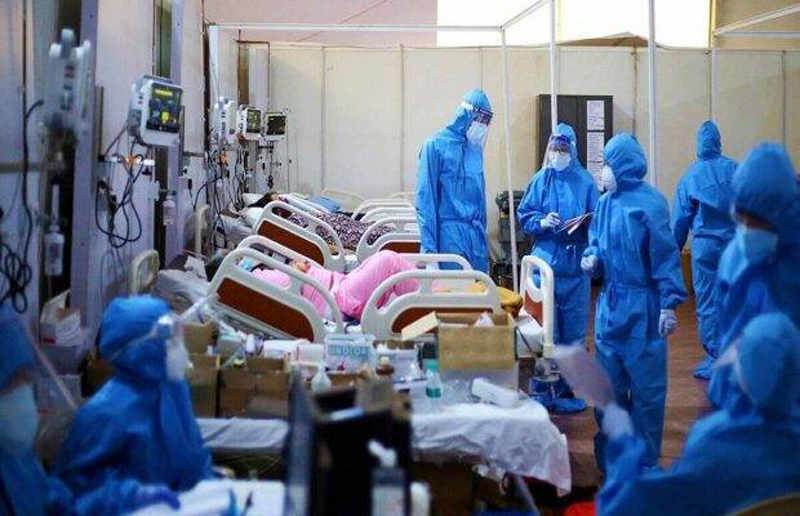 Sanjeev Pargal
JAMMU, Jan 14: Surge in COVID cases continued across Jammu and Kashmir today with 2456 fresh cases and five casualties while the Union Territory of Ladakh also recorded spike with 124 positives.
Among 2456 cases, 934 were reported from Jammu division which also accounted for three COVID fatalities, all fully vaccinated, while Kashmir valley registered two casualties and 1522 cases.
A 64-year-old man from Ward No. 1 Ramkote in Billawar tehsil of Kathua district, 93-year-old male from Ward No. 6 Karan Nagar in Udhampur and 56-year-old man from Jedhi in Pouni area of Reasi district succumbed to co-morbidities and COVID-19 today in Jammu region.
The Ramkote man died in IVY Hospital Amritsar while two others breathed their last in the Command Hospital Udhampur.
Though the trio were fully vaccinated, they were co-morbid, the doctors said.
An officer couple of Jammu and Kashmir Administrative Services (JKAS), putting up at Bhatindi, tested positive for COVID-19 today.
Three more officials from Raj Bhawan Jammu including a Deputy Superintendent of Police and four more officials of the Crime Branch office at Panjtirthi were found infected. More than a dozen persons have tested positive at Raj Bhawan so far during past few days including the SSF officers.
Ten officials from Excise and Taxation Office at Bahu Plaza, five at Axis Bank Bahu Plaza, four at Revenue Training Institute Gole Gujral and three at Jammu and Kashmir State Power Development Corporation Satwari reported positive for pathogen.
Three from Sainik School Nagrota and one from KV Nagrota, three persons from Narwal Sabzi Mandi and two at TRG Hotel also tested positive during the day.
Thirty nine pilgrims of Shri Mata Vaishno Devi Ji shrine were found positive for viral infection during testing on their arrival at Katra Railway Station.
District Magistrate Jammu Anshul Garg today declared 12 locations as micro-Containment Zones.
Locations include Lane near H No. 134 Kailash Nagar in Talab Tillo, Lane near 47 Shopping Centre in Bakshi Nagar, Lane near H No. 116 at Sector 4 in Trikuta Nagar, Lane near H No. 73 at Ward 3 in Bishnah, Lane near H No. 80-B in Sainik Colony, Lane near H No. 53 at Sector 2 in Pamposh Colony, Lane near 821 Sweet Home Apartments near New Birla Open Mind School in Channi Rama, Lane near H.No., 419 at Sector 5 in Channi Himmat, Lane near SBI Quarters near BSNL Exchange at Bantalab, Lane near H.No. 343/B at Sector 1 South Extension in Trikuta Nagar and Lane near H No. 568 A in Gandhi Nagar.
Three casualties have taken COVID toll in Jammu region to 2216. Fatalities include 1166 in Jammu district, 240 in Rajouri, 154 Kathua, 141 Udhampur, 138 Doda, 120 Samba, 102 Poonch, 67 Ramban and 44 each in Kishtwar and Reasi districts.
Among 934 cases in Jammu region, 588 were today reported from Jammu district alone followed by 90 in Reasi, 55 in Udhampur, 52 Kathua, 49 Poonch, 33 Kishtwar, 29 Rajouri, 18 Doda, 16 Samba and four in Ramban district.
With 211 recoveries, active COVID positive cases in Jammu region have gone up to 4802.
Active positive cases in J&K have crossed 10,000 and stood at 10003.
Jammu region now has 1,31,784 Coronavirus cases. Of them, 1,24,766 have recovered while there were 2216 deaths.
Out of 4802 active cases in Jammu region, Jammu district has 2898. The Union Territory of Ladakh today reported 124 fresh COVID positive cases including 104 in Leh district and 20 in Kargil district.
There are now 598 active positive cases in Ladakh—552 in Leh and 46 in Kargil.
Corona count in Ladakh stood at 22973. Of them, 22153 have been treated while there were 222 deaths—164 in Leh and 58 in Kargil.
Meanwhile, more than 200 doctors and paramedics of Government Medical College Srinagar and its Associated Hospitals have tested positive in the third wave of COVID.
At least 109 doctors and 98 paramedics of GMC Srinagar and its Associated Hospitals have contracted the virus since January 1 this year.
Data revealed that 39 doctors have tested positive from SMHS Hospital, 15 from LD Hospital and 11 from Super Specialty Hospital Shireen Bagh, creating a challenging situation for the health sector to deal with COVID-19.
Professor and HoD Community Medicine, SPM, GMC Srinagar, Dr S. Muhammad Salim Khan said that the situation is alarming with number of cases rising exponentially.
“However, the hospital admissions haven’t increased proportionally as these cases are usually mild and recover fast as compared to second wave which was driving by Delta variant,” he added.
He also urged the people to follow SOPs, wear face masks and take all other precautions. “Those who are not vaccinated yet, should come forward for vaccination at the earliest,” he added.
In the meantime, spike in COVID cases continue in Kashmir and today 1,522 fresh cases were reported.
The number of positive cases in Kashmir division has reached 220,839 including 213,297 recoveries and 2,341 deaths.
The number of active cases in Jammu and Kashmir are 10,003 including 5,201 from Kashmir division.
With 380 more recoveries, the tally of total recoveries in Jammu and Kashmir has reached 338,063 which is 95.87 percent of the total cases.
Those who tested positive in Kashmir include 464 from Srinagar, 457 from Baramulla, 139 from Budgam, 22 from Pulwama, 104 from Kupwara, 101 from Anantnag, 95 from Bandipora, 12 from Ganderbal, 120 from Kulgam and 08 Shopian in Kashmir.
The District administration in Budgam, in the meantime, has declared 75 micro-Containment Zones in the district in past two weeks.
Chief Medical Officer (CMO) Budgam Dr Tajamul Khan said that administration has declared total of 75 micro containment zone’s in Budgam, which include 13 macro containment and 62 micro containment zones.
“Hotspots have been identified and in declared Containment Zones, 144 CrPC will remain in place for containment of the disease,” the CMO said, adding that from past one week, cases are rising in district and for the same, administration is ready to tackle the situation.

No non-essential movement on weekends
The Government tonight ordered complete restriction on non-essential movement during weekends in entire Jammu and Kashmir.
An order to this effect was issued late tonight by Chief Secretary Dr Arun Kumar Mehta in his capacity as the Chairperson State Executive Committee.
The decision was taken in view of rising COVID cases in the UT.

ADGP, 4 SHOs, 46 CID men positive
An Additional DGP, four SHOs and 46 CID personnel tested positive for COVID-19 in Jammu today.
The Additional DGP is normal and in home isolation.
SHOs of Trikuta Nagar, Gharota, Bishnah and Akhnoor Police Stations in Jammu district have also been infected. The SHO Domana is symptomatic but his test report is awaited.
Forty six CID personnel today tested positive for the virus in Jammu.