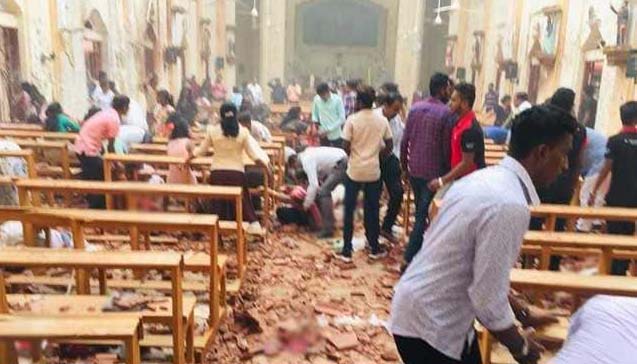 COLOMBO: A string of eight devastating blasts, including suicide attacks, struck churches and luxury hotels frequented by foreigners in Sri Lanka on Easter Sunday, killing 215 people, including three Indians, and shattering a decade of peace in the island nation since the end of the brutal civil war with the LTTE.

The blasts – one of the deadliest attacks in the country’s history – targeted St Anthony’s Church in Colombo, St Sebastian’s Church in the western coastal town of Negombo and Zion Church in the eastern town of Batticaloa around 8.45 a.m. (local time) as the Easter Sunday mass were in progress, police spokesman Ruwan Gunasekera said.

Explosions were reported from three five-star hotels – the Shangri-La, the Cinnamon Grand and the Kingsbury in Colombo.

Gunasekera confirmed 207 deaths. However, the News 1st channel said that 215 people have died in the blasts.

Chairman of Sri Lanka Tourism Kishu Gomes said 33 foreign nationals have been killed in the coordinated attacks believed to be carried out by a single group. Director of the National Hospital Dr Anil Jasinghe identified 12 of the 33 foreign nationals, which include three Indians, two Chinese and one each from Poland, Denmark, Japan, Pakistan, America, Morocco and Bangladesh.