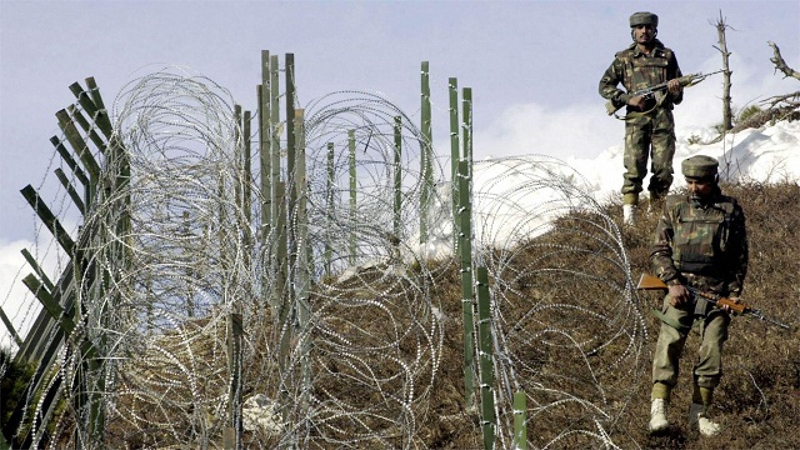 Excelsior Correspondent
JAMMU, Feb 25: Two civilians were injured as Pakistan army intensified mortar shelling and firing on the Line of Control (LoC) at three places in Poonch sector for third consecutive day today while there were reports that the Pakistani troops have suffered damages in the Indian retaliation.
Reports said Pakistan army started pounding civilian locations with mortars and heavy firearms this afternoon at Shahpur, Qasba and Kirni villages of Poonch sector triggering panic among the people living in forward areas. The Indian side retaliated effectively.
Exchange of shelling and firing continued for about two hours in which two civilians were injured as long range mortar shells fired by the Pakistan army fell close to their houses. Injured were immediately evacuated from the site of firing and shelling and shifted to the District Hospital.

They have been identified as Karamat Hussain, 19, son of Nazir Hussain and Mushtaq Ahmed, 22, son of Abdul Qayoom, both residents of Shahpur. Their condition was stated to be stable.
Reports said that Pakistan army was reported to have suffered heavy losses in retaliatory firing by the Indian troops. However, exact losses on the Pakistan side couldn’t be ascertained immediately.
Shelling and firing by the Pakistan army kept border dwellers of forward villages in Poonch sector either inside their houses or bunkers.
Pakistan army has been continuously resorting to shelling and firing on the LoC in Shahpur, Kirni and Qasba forward villages for three consecutive days. Prior to that, Pakistan had targeted forward villages of Balakote and Mendhar in Poonch district. The Indian Army has been giving befitting reply to Pakistan causing heavy casualties and damages across the LoC.
There have been reports that Pakistan army was trying to facilitate infiltration by the trained militants into Jammu and Kashmir under the cover of shelling and firing but the effective retaliation by the Indian troops has thwarted Pakistani designs.
Launch pads across the LoC were reportedly full of militants belonging to Jaish-e-Mohammed (JeM) and Lashkar-e-Toiba (LeT) outfits who were planning to infiltrate into Jammu and Kashmir under covering fire and shelling of Pakistan army.
However, alertness being maintained by the Indian Army hasn’t allowed the designs of Pakistan army and militants to succeed.
Meanwhile, Army today defused mortar shells fired by the Pakistani troops along the LoC in Balakote sector of Mendhar tehsil in Poonch district.
The mortar shell had remained unexploded.
Security forces today called a Bomb Disposal Squad and defused the mortar shell safely.