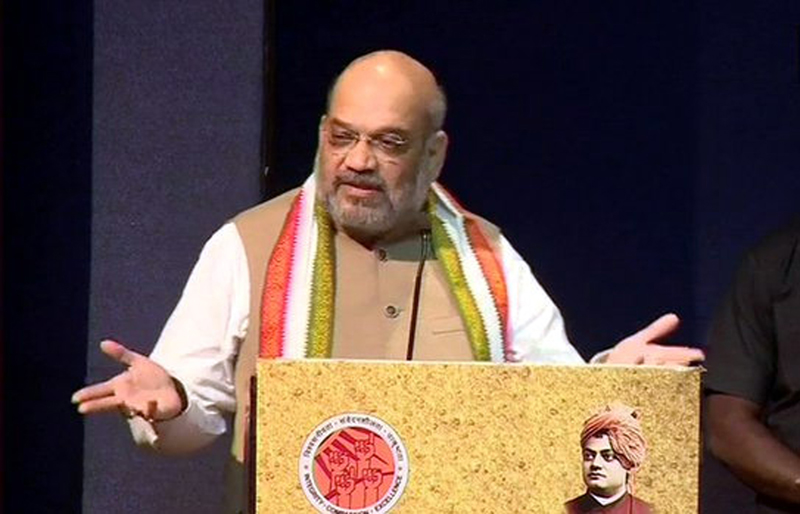 J&K will be most developed region in next 10 years

JAMMU, Sept 29: Union Home Minister Amit Shah today termed the 1987 Assembly elections in Jammu and Kashmir as a turning point for spread of terrorism that has so far claimed 41,800 lives.
“In that election, MLAs were elected even with 10 votes. 1987 election was the root cause of terrorism in Jammu and Kashmir,” he said at an event organized by Samkalp, former Civil Servants Forum at Nehru Memorial Museum and Library (NMML) in New Delhi.
Shah, however, praised former Prime Minister Indira Gandhi for signing the ‘Simla Accord’ saying she ensured that Jammu and Kashmir remains a bilateral issue.
The Home Minister rejected the argument that scrapping Article 370 will “endanger” Kashmiri culture, noting that regional languages and traditions were flourishing in other States.
“I want to ask those people, is there any threat to Gujarat or its ‘Garba’ because it does not have Article 370. Is West Bengal or its ‘Durga Puja’ facing any threat as there is no Article 370 there. Are Karnataka or the Kannada language and Maharashtra or Marathi culture facing threat because there is no Article 370 there,” he asked.
Shah said some people have prevented the culture of Jammu and Kashmir from spreading to other parts of the country, whose strength is unity and diversity.
The Home Minister said as many as 106 laws, including right to education, human rights and ban on child marriage were not applicable to Jammu and Kashmir because of Article 370.
“Tell me one benefit which was available due to Article 370. Because of Article 370, corruption has flourished”?, he asked.
He said Jammu and Kashmir had no Anti Corruption Bureau. “Those who looted Kashmir did not want Anti Corruption Bureau as they did not want any corrupt to be caught. They used Article 370 as a shield to loot people,” he said.
“The Prime Minister has finally rooted out the cankering wound (‘nasur’). He deserves to be complimented,” he said.
Shah said there are no restrictions in the Kashmir valley now and the entire world has supported the move to abrogate the special status given to Jammu and Kashmir under Article 370.
Shah asserted that Jammu and Kashmir will be the most developed region in the country in the next 10 years because of the bold step taken by Prime Minister Narendra Modi on August 5.
The Home Minister faulted the country’s first Prime Minister Jawaharlal Nehru for approaching the United Nations in 1948 on the issue of Jammu and Kashmir
“In 1948, India went to United Nations. That was a Himalayan blunder. It is more than a Himalayan blunder,” he said.
The Minister accused the opposition of spreading “misinformation” about restrictions in the Valley. “Where are the restrictions? It is only in your mind. There are no restrictions. Only misinformation about restrictions is being spread,” he said addressing a seminar on national security.
Shah said curfew has been lifted in all 196 police stations in Kashmir, and only in eight police stations areas CrPC 144 was imposed where five or more persons cannot gather.
“People are free to move around anywhere in Kashmir. Many journalists from rest of India are also visiting Kashmir regularly,” he said.
Referring to the recently concluded United Nations General Assembly session, Shah said all world leaders have supported India’s move on Article 370.
“All world leaders had gathered for seven days (in New York). Not a single leader has raised the issue (of Jammu and Kashmir). This is a big diplomatic victory of the Prime Minister,” he said.
The Home Minister said 41,800 people have lost their lives in the decades-old militancy in Jammu and Kashmir but no one raised the issue of human rights violation of jawans, their widows or the children who were orphaned.
“But people are trying to create hue and cry over lack of mobile connections for few days. Lack of phone connection is not human rights violation,” he said.
Shah also said 10,000 new landline connections were given in Jammu and Kashmir while 6,000 PCOs have also come up in the last two months.
“The decision on Article 370 will strengthen the unity and integrity of India,” he said, adding the situation in Jammu and Kashmir will be completely normal soon.
Shah said there were 631 princely States when India attained independence in 1947 and 630 of them were handled by the then Home Minister Sardar Vallabhbhai Patel and one by Nehru.
“The 630 princely States were merged with the Union of India completely but Jammu and Kashmir remained an issue since 1947,” he said.
The Home Minister said on October 27, 1947, the Indian Army had reached Kashmir and defeated Pakistani attackers. It was marching towards PoK and they were on the verge of victory.
“But suddenly the then Government announced ceasefire. What was the need for announcing the ceasefire when we were about to win the war. Had the ceasefire been not declared, PoK would have been part of India now,” he said.
Shah said there have been lots of rumours and misinformation on Article 370 and those are still going on.
“I want to tell you because of Article 370, Jammu and Kashmir has not been fully integrated into India. Because of Article 370, corruption has flourished there,” he said.
The Home Minister said because of Article 370, “people always had to say ‘Jammu and Kashmir is an integral part of India’. We don’t have to say so when we talk about Karnataka, West Bengal, Gujarat or Delhi.”
He said Article 370 has been an issue for the erstwhile Jan Sangh and then the BJP since the beginning.
“We have launched 11 agitations against it and even Jan Sangh founder Shyama Prasad Mookerjee laid down his life for it. We are the third generation leaders.
“Even Nehru, when he realised the mistakes, kept ( former Chief Minister) Sheikh Abdullah in jail for 11 years. Now, it has not been even two months but people have talked so much,” he said.