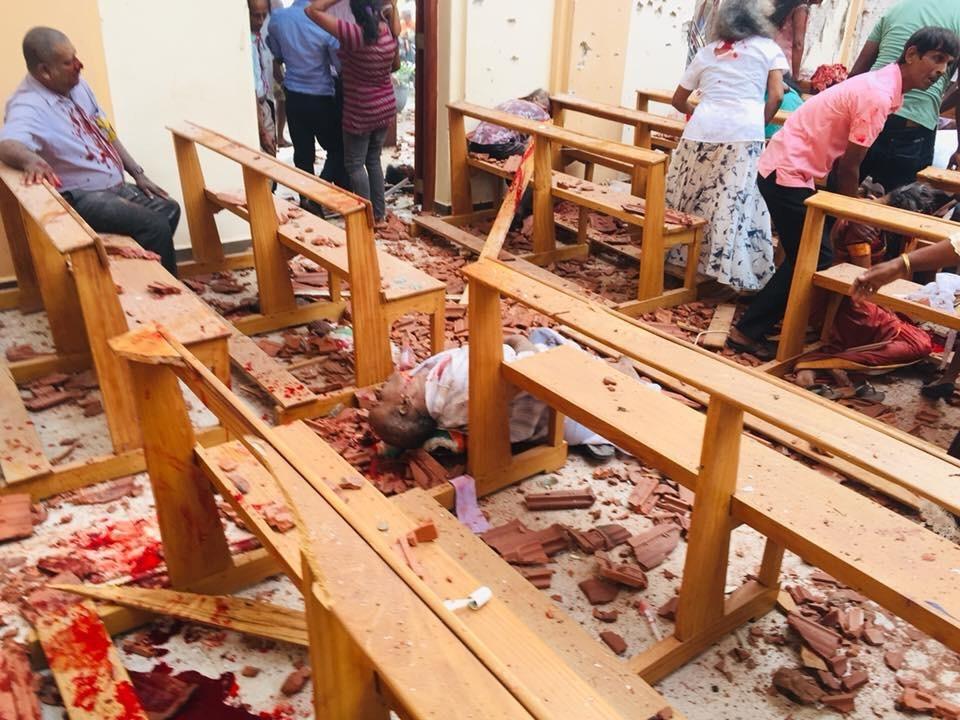 COLOMBO: At least nine foreigners were among 160 people killed in six near simultaneous and coordinated explosions that rocked three churches and three luxury hotels frequented by tourists in Sri Lanka on Easter Sunday, in one of the deadliest blasts in the country’s history, officials said.

The blasts targeted St Anthony’s Church in Colombo, St Sebastian’s Church in the western coastal town of Negombo and another church in the eastern town of Batticaloa around 8.45 a.m. (local time) as the Easter Sunday mass were in progress, police spokesman Ruwan Gunasekera said.

Three explosions were reported from the five-star hotels – the Shangri-La, the Cinnamon Grand and the Kingsbury in Colombo. Foreigners and locals who were injured in hotel blasts were admitted to the Colombo General Hospital.

Harsha de Silva, Sri Lanka’s Minister of Economic Reforms and Public Distribution, said that there have been “many casualties including foreigners.”

“45 people died in Colombo where three hotels and a church were hit, while more than 90 were killed in Negombo and 27 in Batticaloa,” hospital sources said, adding that more than 450 people were injured in the blasts.

Among the 45 bodies at the Colombo National Hospital there are nine foreigners, they said, adding that Americans and British citizens were among the dead.

Dr Kalanidhi Ganeshalingam, the spokesperson for the Batticaloa hospital, said over 100 have been admitted with injuries from St Michael’s Church explosion.

No group has claimed responsibility for Sunday’s attacks.

However, most of the deadly attacks in the past in Sri Lanka were carried out by the Liberation Tigers of Tamil Eelam (LTTE) which ran a military campaign for a separate Tamil homeland in the northern and eastern provinces of the island nation for nearly 30 years before its collapse in 2009 after the Sri Lankan Army killed its supreme leader Velupillai Prabhakaran.

“I have been shocked by this totally unexpected incidents. The security forces haven been asked to take all action necessary,” Sirisena said.

Prime Minister Ranil Wickremesinghe termed the blasts as “cowardly attacks” and said his government was working to “contain the situation.”

“I call upon all Sri Lankans during this tragic time to remain united and strong… The government is taking immediate steps to contain this situation,” he tweeted.

The Sri Lankan government has summoned an emergency meeting. All necessary emergency steps have been taken by the government, Harsha de Silva said.

“Horrible scenes. I saw many body parts strewn all over. Emergency crews are at all locations in full force. We, at 1990 also have close to 20 units at the various locations. We took multiple casualties to hospital. Hopefully saved many lives,” he said.

The Indian High Commission in Colombo said that it was closely monitoring the situation in Sri Lanka.

The first blasts were reported at St Anthony’s church in Colombo and St Sebastian’s Church in Negombo just outside the capital.

“A bomb attack to our church, please come and help if your family members are there,” read a post in English on the Facebook page of the St Sebastian’s Church.

The blasts were followed by explosions at three hotels in Colombo and the church in Batticaloa.

Leave of all police personnel has been cancelled in the wake of blasts.

Doctors, nurses and health officials who were on leave have been asked to report to work, Health Ministry sources said.

The government schools have been closed for Monday and Tuesday.

Former president Mahinda Rajapaksa, under whose leadership the Lankan Army crushed the LTTE, termed the attack as “absolutely barbaric”.

“It is absolutely barbaric to see such violent attacks on such a holy day. Whoever is behind these attacks must be dealt with immediately. My thoughts and prayers are with the families that lost loved ones and all of Sri Lanka,” he said.

“We will not tolerate such violence, such acts of terrorism, of cowardice within our borders once again. We will stand together and rise up against it as one voice. We will stand united as a nation,” he said. (AGENCIES)