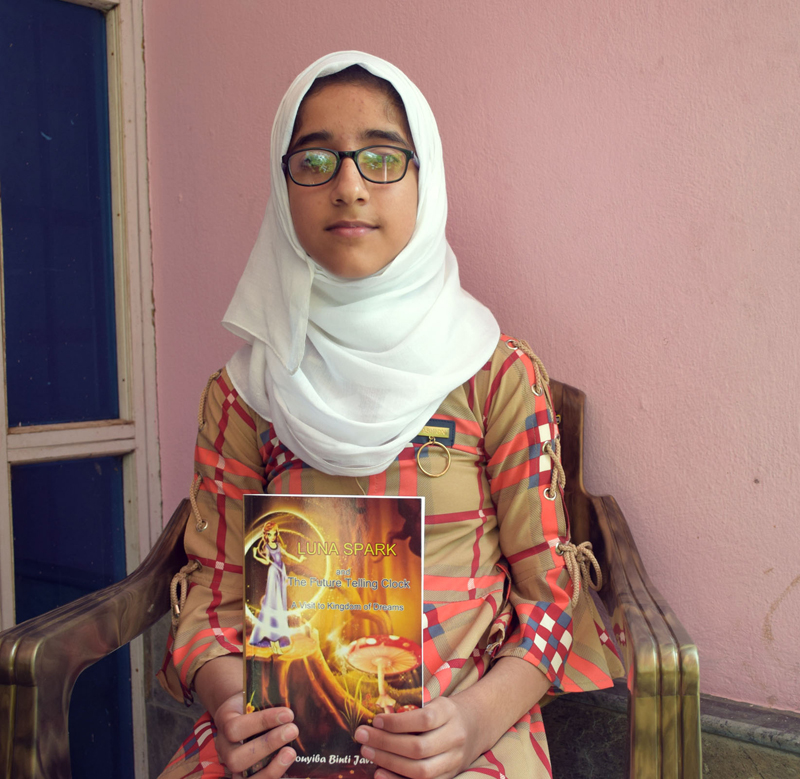 TRAL, May 12: Imaginative enough at the age of 13 year, Touyiba Binti Javaid, from Dadsara area of South Kashmir has written her debut fantasy novel in which the characters are on the adventure to find a magical clock which tells the future.
While talking about her novel, which she has named as ‘Luna Spark and The Future Telling Clock,’ Touyiba said that it is basically a novel for children, which is full of suspense and mystery.

Click here to watch video
“It is a fictional account in which humans are replaced by cats, I myself am in the book and I am also a cat. We have a mission of finding the stolen magical clock which tells the future,” she said, while adding that “in order to know who stole it and how we found it, you will have to read the book”.
She says that it is a moment of pride for her and that she is yet to come to terms with the fact that she has actually written a book. “It is moment of great pride for me, and at times, I fail come to terms that I have actually written the book,” she said.
Touyiba says that she has not sought anyone’s help while she was writing the book and that she has done it all by herself. Her novel has been published with the support of J&K Academy of Art Culture and Languages.
“Nobody helped me, rather I did not let anyone help me anyway, I did it of my own and I wanted to take all the credit. I am thankful to my parents who stood by me during the entire process,” she said.
She says that the key to success is to know one’s self, at the same time, she advised the parents not to force their kids into something that they do not want to do. “Parents should let their kids the way they want and at the same time kids should know their selves and should know their talent, only then, they can succeed,” she said.
Touyiba’s father, Dr Javaid, a dental surgeon by profession said that it is a moment of pride for him and that he knew that Touyiba would do something amazing one day.
“She had a knack of writing since class 4. She used to write poems and stories, and I used to show whatever she used to write to my friends. I knew that she would do something great and today she has produced a full-fledged book,” Dr Javaid said.