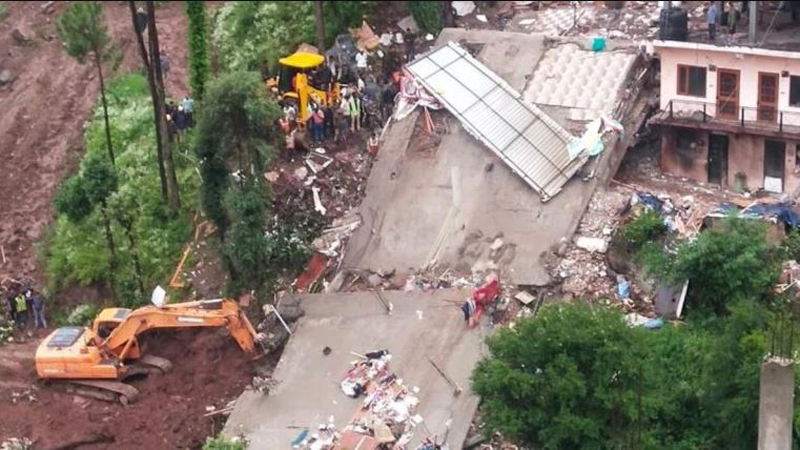 SHIMLA, July 15: Fourteen people died and 28 others were injured after a multi-storey building collapsed in Himachal Pradesh’s Solan district, officials said today.
The bodies of 13 Army personnel of 4 Assam Regiment from nearby Dagshai Cantonment and a civilian were extricated from the debris, they said.
Twenty-eight people, including 17 Army personnel and 11 civilians, were injured after the four-storey building, which housed a restaurant, collapsed on the Nahan-Kumarhatti Road on Sunday evening following heavy rains. Click here to watch video
The rescue operation ended at about 4 pm on Monday, Solan Additional Superintendent of Police Shiv Kumar said.
“None of the 28 injured are critical. They are being treated at two local hospitals,” he said.
Earlier, Chief Minister Jai Ram Thakur visited the spot to take stock of the rescue work. He also paid a visit to the hospitals to enquire about the health of the injured.
He said initial investigation has found that the structure was not built up to specifications.
“A magisterial inquiry has been ordered. Strict action will be taken against erring persons after getting the report,” Thakur said.
The CM said an FIR has been registered against the owner of the building. (PTI)