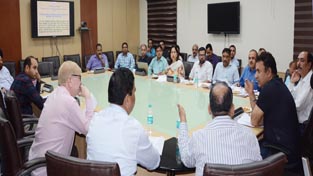 Excelsior Correspondent
JAMMU, Apr 3: Minister for Food, Civil Supplies and Consumer Affairs (FCS&CA) and Tribal Affairs Choudhary Zulfkar Ali today convened a meeting with the officers of FCS&CA Department to review the physical and financial status of the department.
Commissioner Secretary FCS&CA, M D Khan, Director FCS&CA Jammu, Ch Rashid Azam Inqalabi, Director FCS&CA Kashmir Nisar Ahmad Wani, Additional Secretary Jugal Kishore Anand Financial Advisor Zia Qazi and other senior officers of Planning, Finance and concerned departments were present in the meeting.
The meeting discussed various issues pertaining to allocation, distribution, purchase and sale of food grains under NFSA and MMSFES, total allotment made under State Budget, handling charges carriage/ commission /labour charges and funds remitted into revolving fund account.
The Minister was informed that the administrative department has approved Rs 220 crore for the department under State Budget for the current financial year 2017-18. The allotment of Rs. 121.45 crore was made for handling charges from State Budget and from revolving funds.
Stressing on maintaining financial discipline, the Minister asked Commissioner, Secretary to constitute a Committee headed by Additional Secretary to conduct the financial audit on allocation, lifting, distribution of food grains and expenditure incurred in all the districts of the State and submit the comprehensive report to the administrative department by April 30, 2018.
Later, the Minister convened a meeting with the officers of Tribal Affairs Department, district administration Rajouri and JK Housing Board.
MLA Rajouri Ch. Qamar Hussain was also present in the meeting.
During the meeting, the Minister reviewed the status of land for the construction of Eklavya Residential School at Rajouri and directed the officers of revenue department to identify the feasible land and expedite the process for construction of the same.
He further directed JK Housing Board to construct various blocks concurrently with Gujjar and Bakerwal Hostel at Kotranka besides channel fencing of the area. He asked for identification of land for construction of Tribal Bhawan at Jagti.
Zulfkar Ali directed Housing Board to accelerate the pace of work of various ongoing construction works so that the projects are completed in time. He stressed upon the officers to maintain quality standards in its works besides doubling their efforts to complete the project within stipulated time frame.