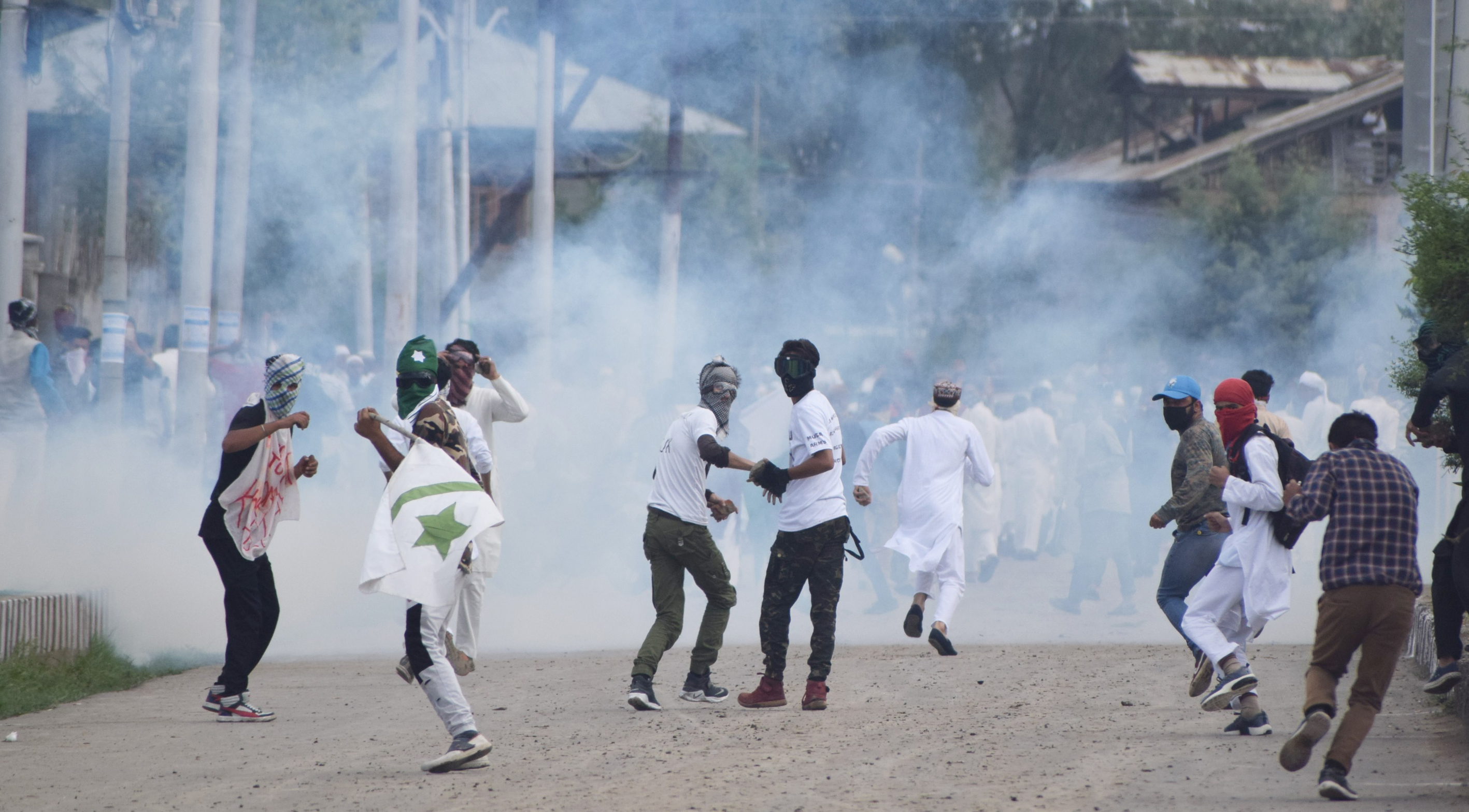 Fayaz Bukhari
SRINAGAR, June 16: A youth was killed and at least two dozen persons including police men were injured in clashes that broke out at Anantnag town in South Kashmir this morning soon after Eid prayers while three persons were injured in militant attacks.
Protests broke out in Anantnag soon after the Eid prayers this morning. As soon as people came out of Masjids after offering Eid prayers, protests broke out and youth pelted stones at the security forces deployed in the area. The CRPF men fired tear gas and pellets, triggering further clashes.

Click here to watch video
At least 12 youth were injured as security forces used force to quell the protests at Ashijipora and its adjoining areas. The injured were shifted to district hospital Anantnag for treatment.
One among the injured Sheraz Ahmad Naikoo, 18, of Brakpora succumbed to injuries at Janglat Mandi hospital where he was taken along with other injured. He had pellets injuries in his face, neck and chest.
Ten policemen were also injured during the clashes and have been identified as Aijaz Ahmad ( No . 1275 A) Mohammad Ashraf ( No. 568 ) resident of Shangus, Bilal Ahmad (DPL, Anantnag ) R/o Kulgam, Aaqib Shafi (No. 1067 A ) Altaf Hussain ( No. 1020 A ) Haroon Mir ( No.1353 A ) Irshad Iqbal Khan ( No. 983 A), J P Singh son of Herpal Singh and Mohammad Afzal.
Meanwhile, protests also erupted after Eid prayers at Srinagar’s Eidgah and some other places in the Valley including Kupwara.
A CRPF man was injured after militants attacked their party in Lasjan area of Srinagar this afternoon.
A group of militants fired indiscriminatly at the CRPF personnel of 29 battalion at Lasjan near Pantha Chowk. One CRPF personnel was injured in the attack. The CRPF personnel also fired at militants but they fled without any casualty.
The entire area has been cordoned off and massive searches in the area were conducted against the militants responsible for the attack. The operation was later called of.
Two persons were injured after militants shot at them in Trenz village of South Kashmir’s Shopian district this evening.
Militants fired upon two persons – Aijaz Ahmad Mir and Sheraaz Ahmad Malik at Trenz. They were injured in the attack and were immediately removed to district hospital Pulwama where from they were referred to Srinagar for treatment.