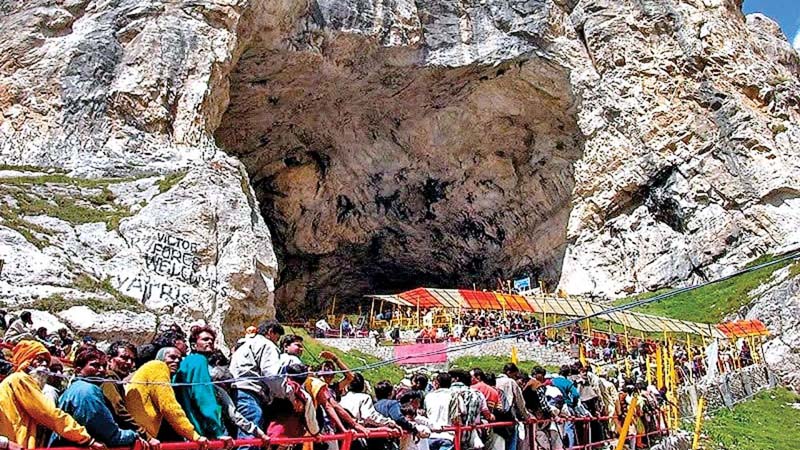 Excelsior Correspondent
JAMMU, Aug 16: With performance of ‘Puja-Archana’ at holy cave by ‘Chhari Mubarak’ led by its sole custodian, Mahant Deependra Giri Ji of Dashnami Akhara, Srinagar on the auspicious occasion of Shravan Purnima yesterday and ‘Samapan Pujan’ (culminating puja) by Shri Amarnath Shrine Board (SASB), the annual pilgrimage of Shri Amarnath Ji has concluded.
They holy Mace led by Mahant Ji and accompanied by 20 more Sadhus and devotees reached cave shrine situated at an height of 3880 meters in deep Himalayas in South Kashmir district of Anantnag early yesterday morning from Panchtarni, the last halting station on way to cave shrine.

Click here to watch video
After the day -long Pujan in the cave shrine in a traditional way the holy mace returned to Dashnami Akhara, Srinagar in specially arranged choppers. At Dashnami Akhara, Srinagar the holy Mace performed other rituals in connection with the annual pilgrimage which it could not perform at the bank of river Lidder in Pahalgam as per the tradition. This way the annual pilgrimage which started on July 1 this year from both shortest Baltal and traditional Chandanwari tracks concluded yesterday.
Along with Pujan by holy Mace the concluding Puja was also performed by Shrine Board at the cave shrine yesterday.
District Development Commissioner, Srinagar Shahid Iqbal told Excelsior that the authorities had made all arrangements for the holy mace including choppers for carrying the Sadhus to and fro.
He said advance teams were already dispatched to cave shrine to receive the holy Mace and all steps were taken so that the Sadhus should not face any problem during their pilgrimage.
The holy mace was carried to Panchtarni on August 14 in special choppers for performance of darshan and annual rituals as it could not take the traditional Anantnag -Pahalgam route due to disturbing conditions in the Valley and advisory issued by the Government.
Earlier as per schedule, the holy Mace had to leave its abode Dashnami Akhara, Srinagar on August 10 for annual pilgrimage to cave shrine. It would reach the cave shrine in the early morning of Shravan Purnima and after day -long Puja Archana it had to return to Panchtarni in the evening. From Panchtarni it would start journey towards Pahalgam next morning. After a night halt at Pahalgam it used to perform immersion ceremony in river Lidder besides other religious rituals, which was followed by offering of prashad to Sadhus before leaving for final journey to Dashnami Akhara, Srinagar. But due to the prevailing situation all these ceremonies could not be performed this year.
Anoop Kumar Soni, Additional Chief Executive Officer of Shri Amarnathji Shrine Board (SASB) along with other officials visited the cave shrine early yesterday morning and carried out ‘Samapan Pujan’. He prayed for sustained peace, harmony, progress & prosperity in the State. The Additional CEO stated that 3,43,587 yatris had paid obeisance at the holy cave shrine during this year’s pilgrimage.
Chief Executive Officer, Umang Narula informed that this year arrangements were improved for Yatra over the last years by Shrine Board which included online registration for yatra, bar coding of Yatri Permit Forms, SASB App for Yatris, improved sanitation facilities with installation of Bio toilets at Baltal & Reverse vending machine at Chandanwari, upgraded health care facilities, telecom facilities etc.
Governor Satya Pal Malik, complimented the civil and police administration of Anantnag and Ganderbal districts, J&K Police, Central Armed Police Forces, Army, various State Government Departments and all other agencies for smooth completion of Yatra 2019.
The Governor lauded the people of Kashmir for making this annual pilgrimage a successful event ever since it is being observed. Appreciating the valuable support of local people in conduct of this Yatra, he described their role in this Yatra as a true essence of Kashmiriyat which is exemplary for its communal harmony.