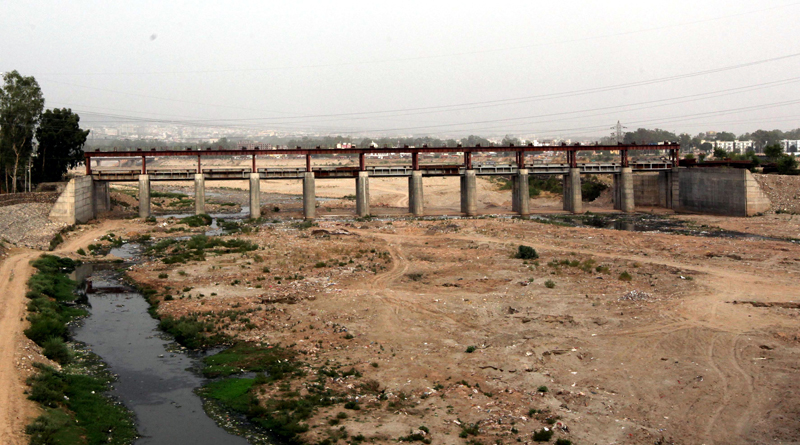 Vital project expected to be completed by May next year

Mohinder Verma
JAMMU, Dec 21: In a major development, Madras High Court has vacated the interim injunction regarding termination of contract allotted in the favour of M/s GVR Infra Projects Limited by the J&K Government for the execution of River Tawi Gated Barrage Project. This has paved the way for floating of fresh tenders for the left over work on the vital project, which is now expected to be completed by May next year.
Official sources told EXCELSIOR that Advocate Sathish Kumar, who has been engaged by the Department of PHE, Irrigation and Flood Control for countering Arbitration Petition filed by M/s GVR Infra Projects Limited in the Madras High Court, has conveyed to the J&K Government that interim injunction regarding termination of the contract allotted in favour of M/s GVR Infra Projects Limited has been vacated.
“However, interim injunction regarding invocation of bank guarantees shall stay till further orders from the Madras High Court”, Advocate Sathish Kumar has further conveyed to the Department of PHE, Irrigation and Flood Control of J&K. However, he has dropped sufficient hints about vacation of interim injunction on bank guarantees also in next few hearings before the High Court of Madras.
“This development has paved the way for floating of fresh tenders for the completion of left over work on the project of immense importance from tourism promotion point of view”, sources said while disclosing that Secretary to Government Department of PHE, Irrigation and Flood Control Farooq Ahmad Shah in consultation with the Advisor concerned K K Sharma and Chief Secretary BVR Subrahmanyam has issued instructions to the Chief Engineer Irrigation and Flood Control Jammu for inviting bids for completion of remaining work on the project.
They further disclosed that project is now expected to be completed in all respect by May next year as 85% work for design and construction of barrage (artificial lake) has already been completed.
“Even instructions have been issued to the Housing and Urban Development Department to start work as expeditiously as possible for beautification of banks of River Tawi so that by the time Gated Barrage Project is ready the maximum works to give aesthetic look to the banks of the river are completed”, sources said.
The work on the project was abandoned by M/s GVR Infra Projects Ltd in the month of February last year and as it failed to re-start work despite several notices issued by the Irrigation and Flood Control Department the Government finally on the recommendation of State Level Contract Committee terminated the contract.
However, the decision of the State Government was challenged by the company in the Madras High Court by filing Arbitration Petition, which is still pending and now only bank guarantees aspect is to be dealt with.
“It was due to abandoning of the work by the company that project could not be completed by March 2018”, sources said, adding “now Governor’s Administration has decided to make the project ready by May next year”.
The project is comprised of 31 gates, 11 in Badi Tawi and 20 in Nikki Tawi and it was approved at an estimated cost of Rs 70 crore. The project has already missed numerous deadlines mainly because of dilly-dallying approach of M/s GVR Infra Projects Limited.
The project is of immense importance as on one side artificial lake due to construction of barrage will help in providing irrigation facilities to huge chunk of agricultural land and on the other side will become a source of attraction for the tourists.
It is pertinent to mention here that developments vis-à-vis this project are being monitored by the State High Court in a Public Interest Litigation titled Inderjeet Khajuria Versus State of J&K and Others.
On December 6, 2018, the Division Bench headed by Chief Justice Gital Mittal had impleaded M/s GVR Infra Projects Limited as party respondent and issued notice to the company. Now, the PIL will come up for hearing on December 26, 2018.
Meanwhile, Advisor K K Sharma visited the site of the project, which is now to be completed at a cost of Rs 105 crore.
Stressing on strict adherence to the latest deadline for the completion of project, Advisor directed the concerned functionaries to expedite the pace of construction on allied balance works including construction of guide wall.