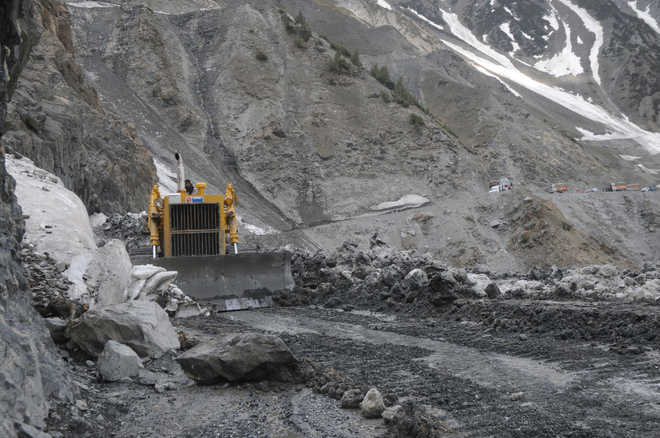 Mohinder Verma
JAMMU, Oct 18: Despite lapse of considerable period of time, work on Ladakh connectivity projects sanctioned under Prime Minister’s Development Package (PMDP) is going on at snail’s pace and are unlikely to be completed within the fixed time-frame. Due to this, there is strong resentment among the people of both the districts of the region.
In order to meet developmental needs of Jammu and Kashmir, Prime Minister Narendra Modi had on November 7, 2015 announced Rs 80,000 crore worth Development Package for the State.
It was announced that the package will be executed over a period of five years in a phased manner with annual disbursement depending on the spending capability of the State Government and the implementing agencies.
Under Prime Minister’s Development Package (PMDP), a significant allocation is meant for Ladakh region and some of the major projects are Rs 9090 crore worth Zojila Tunnel, 4200 crore worth Kargil-Zanskar road, construction of tunnels at Lacchulunga Pass and Tegland Pass on Manali-Leh Section and completion of work on Nimu-Padam-Darcha road and restoration of infrastructure damaged due to floods.
The main objective behind these projects under PMDP was to improve connectivity within these two districts and with rest of the State so as to minimize the difficulties of the people who generally remain cut-off for several months in a year due to vagaries of weather.
“However, work is going on at snail’s pace on almost all connectivity projects despite lapse of considerable period of time mainly because of limited working season coupled with inordinate delay in accord of formal approvals to the Detailed Project Reports by the concerned agencies of the Union Government”, official sources told EXCELSIOR.
As far as Zojila Tunnel is concerned, which on completion will bring an end to the connectivity related problem of Ladakh region once and for all, sources said, “nobody either in the State administration or in the Union Government is in a position to specify the exact time for restart of work on the project what to talk of its completion”.
The foundation stone of Zojila tunnel, which is going to be Asia’s longest bi-directional tunnel, was laid by Prime Minister Narendra Modi on May 19, 2018 but no discernible progress has been made on the project till date mainly because project has yet not come out of bidding process, sources informed.
After a long drawn exercise, the project was awarded to IL&FS but early this year Union Ministry of Road Transport and Highways terminated the contract with the beleaguered agency as company was finding it difficult to work as per the timeline, sources said while disclosing that at the time of termination of contract only 7 to 10% work had been executed on ground.
Though the project was retendered in the month of February this year yet the exercise has not reached the logical conclusion as a result of which work stands abandoned on the project of immense importance for Ladakh region, sources further said, adding “due to hanging fate of the project there is strong resentment among the people of both Kargil and Leh districts as tunnel is the only hope for all-weather connectivity between Srinagar-Kargil and Leh”.
About Kargil-Zanskar road for which an amount of Rs 4200 crore has been earmarked under PMDP, sources said, “no doubt work on some patches and bridges is going on but Detailed Project Reports for eight critical sections have yet not been given approval by the Union Ministry as a result of which nobody knows when this project will be completed”, adding “delay in accord of approval is notwithstanding the fact that there is limited working season in Kargil because of vagaries of weather”.
“Similarly, snail’s pace work is going on Nimu-Padam-Darcha road which will connect vast population with the district headquarters Leh besides providing alternate road connectivity to Zanskar”, sources further said, adding “some hard rocks are creating impediments in gearing up work on this project sanctioned at a cost of Rs 1707 crore under PMDP”.
Similarly there is no substantial progress on construction of tunnels at Lacchulunga Pass and Tegland Pass on Manali-Leh Section. As far as restoration of infrastructure damaged due to floods in both the districts is concerned, sources said, “though works at many places have been completed yet payments of the contractors are still pending although sufficient funds in this regard have been earmarked under PMDP”.
“All this clearly indicates that these projects will not meet the timelines fixed for their completion”, sources remarked.