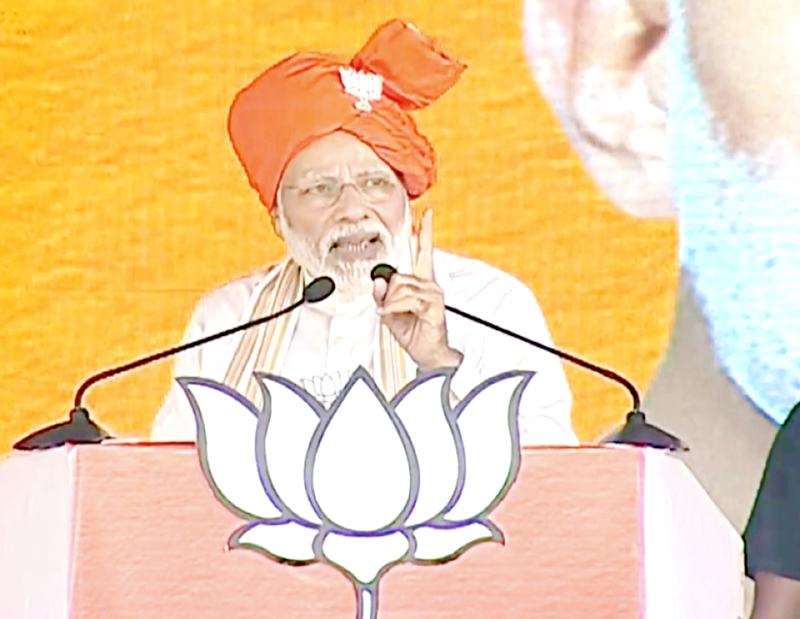 Sanjeev Pargal
JAMMU, Oct 18: Prime Minister Narendra Modi today mooted five ‘Is’—Integration, Inclusion, Industry, Investment and Innovation—for ending separatism, terrorism and violence in Jammu and Kashmir even as he said he has paid real tribute to the brave martyr soldiers by scrapping Article 370 of the Constitution of India granting special status to the State.
“Scrapping of Article 370 is not just abrogation of a System. It means Integration, Inclusion, Ind-ustry, Investment and Innovation,’’ the Prime Minister said addressing election rallies in Haryana today.
Elaborating on his concept of five ‘Is”, Modi said Integration will boost Inclusion, Inclusive Society will strengthen the Investment, when Investment comes, the Industry will flourish, when Industry develops, the culture of Innovation will progress.
“Once we succeed in developing this culture in Jammu and Kashmir and Ladakh, the scope of separatism, terrorism and violence will end,’’ he asserted.

Modi said he got biggest satisfaction by abrogating Article 370 in Jammu and Kashmir that he has paid real tribute to brave martyr soldiers.
“What we did on August 5, none would have imagined. The country had even lost hope of this. On August 5, we made entire Constitution of India application to Jammu and Kashmir. For last 70 years what was biggest hurdle in development of Jammu and Kashmir and Ladakh, we removed that,’’ Modi said referring to scrapping of special Constitutional provisions of J&K by the Parliament on August 5, which facilitated application of all Central laws in the State.
But, the Prime Minister said, the Congress hasn’t been able to digest the decision.
“Their (the Congress) stomach is upset since then. No medicine is working. Their illness has no cure,’’ he remarked.
Asserting that the decisions the Central Government took were not easy, the Prime Minister said whenever the existing situation is changed, certain resistance and problems are bound to crop up. However, he said, this is the India of 21st century, which can’t be terrorized and can’t bury the challenges under carpet.
“Article 370 had become major obstacle in ‘One Country, One Constitution’ for the last 70 years. None dared to remove the Article despite talking about it,’’ Modi said.
“Terrorists came and kill our people and we kept waiting for them. The country has changed. Now, there is no wait. The arrangement has been made for them,’’ he added.
Taking a dig at the Congress, he said the Congress is not worried at all about the brave soldiers, who are performing their duties for security of Jammu and Kashmir and Ladakh. Congress is also not worried about aspirations of Dalits and downtrodden, who were deprived of their rights for seven decades in Jammu and Kashmir, he added.
“When we talk of surgical strikes and Balakote, the Congress gets irritates and is frustrated,’’ he said.
Without naming Pakistan, the Prime Minister said the neighbouring country cites the claims of the Congress to create uproar (on Jammu and Kashmir).
Hitting out at previous Government at the Centre, Modi said that the water on which farmers of the country had the right was flowing to Pakistan.
“Was it not the responsibility of the previous Government to give farmers the water over which they had their right’’?, he asked.
PTI Adds: Prime Minister Narendra Modi hit out at the Congress, saying it has already “accepted defeat” in the Haryana Assembly elections.
Modi was referring to a purported video in which three Congress leaders at the Parliament complex were seen discussing prospects of the party in the polls.
“You clearly understand the situation of the Congress. What is their position now? Recently, a video of them went viral. It was clear that they were saying that it would be enough if they could win 10-15 seats,” the PM said, adding that those who have accepted their defeat could do nothing for Haryana.
He also alleged that the State leader in the video was insulted by other party leaders.
“I was surprised that the poor Haryana leader was replying with folded hands and the other Congress leader was showing his anger? Have you seen the video? Will you tolerate such an insult of Haryana? Could such ‘netagiri’ bring pride and raise honour of Haryana,” said Modi.
Taking a dig at the opposition parties, the PM said people would have to decide between those who delivered and those who indulged in misdeeds.