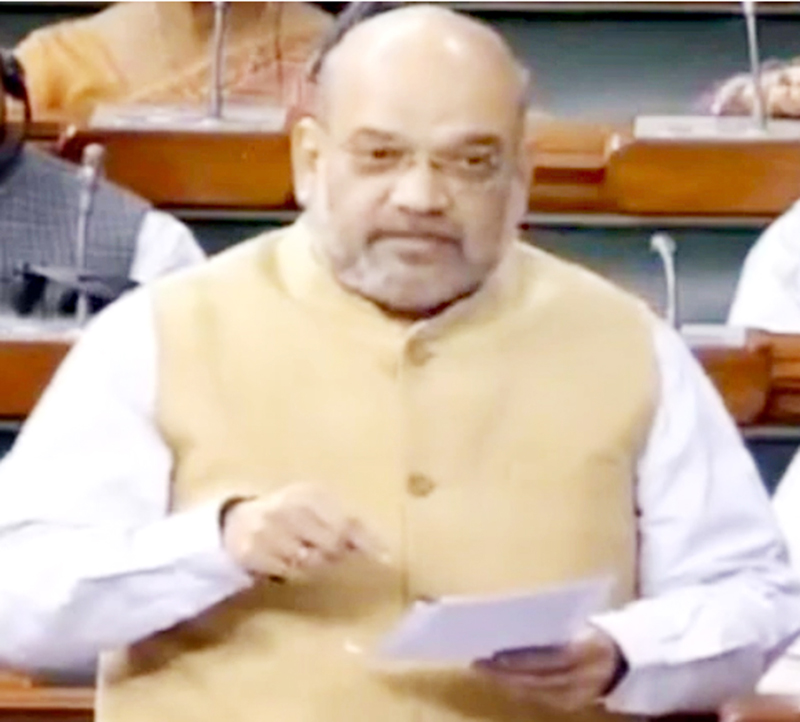 NEW DELHI, July 15: Refuting opposition’s claims of “misuse” of the NIA law, Home Minister Amit Shah today asserted that the Modi Government will never abuse it to target anyone but will ensure that terrorism is finished off irrespective of the religion of the accused.
In an intervention during a discussion in Lok Sabha on the National Investigation Agency (Amendment) Bill, 2019, Shah also targeted the Congress-led UPA Government for repealing the anti-terror act POTA, saying it was not done because of its alleged misuse but to “save its vote bank”.
He said terror attacks witnessed an upsurge after the Prevention of Terrorism Act (POTA) was repealed resulting in the same UPA Government being forced to constitute the NIA after the 2008 Mumbai attacks.
Shah sought support of all parties for the bill’s passage, saying a division in the House on the issue of strengthening the agency will send out a wrong message and boost the morale of terrorists.
The Bill allows the National Investigation Agency to investigate terror attacks on Indians and Indian interests abroad.
Parliament should speak in one voice in giving powers to the NIA to send out a message to terrorists and the world, he asserted.
His response came as several opposition leaders criticised the bill and accused the Government of using investigating agencies for “political vendetta”.
Some MPs said the anti-terror law is misused at times to target members of a particular community.
“Let me make it clear. The Modi Government has no such intention. Its only goal is to finish off terrorism but we will also not look at the religion of the accused while taking action,” Shah said.
Further responding to clarifications sought by certain members including on alleged backlog of cases, he said that there is only one NIA designated court in every state.
He said that these courts would only take NIA cases and not others.
This matter should not be linked to Jammu and Kashmir, he replied when a member said that the designated court in the State is in Jammu and claimed it creates hassles for people from other parts of the State.
Referring to the 2007 Samjhauta Express bombings case, the Minister claimed that the Congress did a U-turn, arrested innocents and released those nabbed earlier.
“Terrorism is neither ‘left’ nor ‘right’,” it is terrorism only,” he added.
When clarfication was sought on whether Pakistan is covered under the proposed law, Shah said although the neighbouring country has not yet signed an international agreement on terrorism related cases, India has “several means including surgical and air strikes to deal with Pakistan”.
“I am sure that Pakistan would also have to sign that agreement under international pressure,” he said.
Responding to Manish Tewari’s remarks that even the CBI’s Constitutional validity is not settled yet, the Home Minister said that the matter is sub-judice and alleged that it was Congress which has misused the CBI.
On fixing time-frame for investigation and prosecution, he said the law takes its own course but still the NIA cases have positive results and 90 per cent success rate.
He assured NCPs’s Supriya Sule that though cases related to murder of rationalists Narendra Dabholkar and Govind Pansare are not under the NIA, justice would be done.
Later, the Lok Sabha passed the bill to allow it to probe terrorist acts against Indians and Indian interests abroad.
The amendments will also allow the NIA to probe cybercrimes and cases of human trafficking.
The NIA was set up in 2009 in the wake of the Mumbai terror attack that had claimed 166 lives. Since 2017, the Union Home Ministry has been pushing for giving more power to the NIA to meet fresh challenges.
Defending the bill, the Government refuted opposition’s claims of “misuse” of the NIA law to target members of a community and asserted its only goal is to finish off terrorism.
Replying to the discussion, Minister of State for Home Affairs G Kishan Reddy said that the Government is committed to protect the country from terrorism.
“This is a Government run by chowkidar and will be at the forefront for the security of the country,” he said adding terrorism has no religion or caste or region, “it’s just terrorism”.
He said that there are no issues of federal system with NIA and it works in close coordination with states and their agencies.
He added that NIA often writes to chief secretary and DGP of state before initiating an investigation.
He said that surgical and air strikes have shown that there are other means available with the government to deal with terrorism cases when it comes to Pakistan.
“Things were not properly worked out during your (Congress) Government, that we are fixing, he said adding the Government is working that
NIA is investigating as many as 272 cases and in that they have filed charge sheet in 199.
The Minister said that out 272, in 51 cases the courts have already delivered their judgements and in 46 cases, people have been convicted and “there is a 90 per cent conviction rate”.
He said that the people have given the mandate to the Government to protect the country from terrorism.
“We want to strengthen NIA” and it does not have any link to any religion or political party, he said.
Later Asaduddin Owaisi (AIMIM) sought division when the bill came up for passage.
Even Home Minister Amit Shah said that division should be taken up to show “who all are for or against terrorism”.
While 278 members supported its consideration, only six opposed it.
The bill was later passed by a voice vote. (PTI)