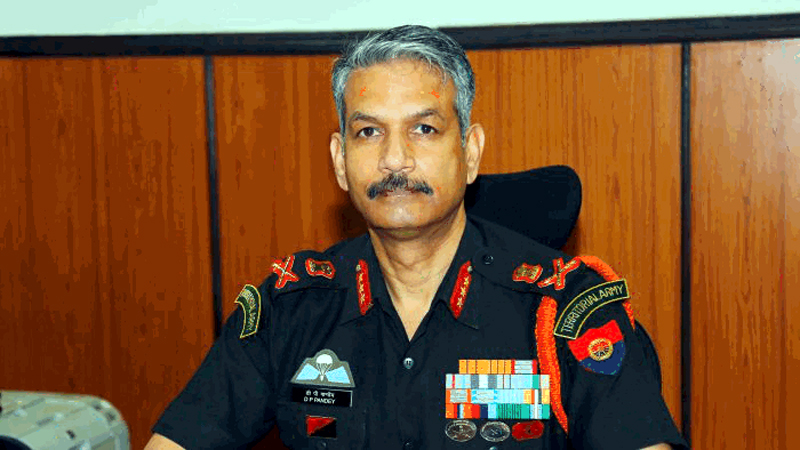 Srinagar, Oct 12: General Officer Commanding 15 Corps, Lt Gen D P Pandey today said that they are extremely vigilant and soldiers are giving ultimate sacrifices for the safety of the nation and they will not allow any infiltration around the Line of Control (LoC).
Speaking to reporters, Pandey said the operation in Poonch, where 5 Army soldiers were killed, is still going on and the soldiers are giving major sacrifices for the safeguarding of the people.
“The operations which are going on from the last few days are based on intelligence. I won’t connect it with any before or after event happening in the Kashmir Valley. It is a usual security process.” Click here to watch video
Replying to a question, Pandey said that this is the last opportunity for the inimical agents to ensure that they can push back certain militants and militant groups in the country.
“The Army has been getting regular inputs about these bids. There were two such infiltration bids around Uri and Poonch sector but both of these have been foiled and completely neutralised by our soldiers.”
He assured that they are absolutely vigilant on the LoC and they won’t allow any infiltrator to come through. “If one or two come through, they will be eliminated with the help of the people of the valley inside,” he said.
Meanwhile, he informed that 300 youth have been selected for various courses in a joint venture which is within Indian Army and Mewar University, wherein the youth will be provided diploma, undergraduate and postgraduate courses.
“The students have to pay only an amount of Rs. 30000 for the courses which are going to be costing about Rs 1.5- 2 lakh per annum. The entire facilities including hostel fee, books and studies will be absolutely free and will be looked after by the Army and Mewar university”, he added.
He said that this venture will allow the youth of J&K and Ladakh to learn various skills required for acquiring jobs and doing well for the society and country.
He also said that there hasn’t been an increase in militant activities since recent days but definitely there has been a spike in civilian killings.
“Each and every loss is irreplaceable for their families and the country. I can assure that these are elements which are being driven from across the LoC,” Pandey said.
He said that they have to be extremely careful to ensure that communal harmony of the people of the Valley should not be hampered in view of these brutal and condemnable Killings.