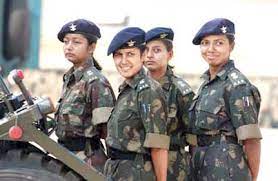 The role of Indian women in Army started in 1888 with establishment of Indian Military Nursing Services but as nurses and doctors only till 1992 when women got inducted as SSC under Women Special Entry Scheme with maximum five years which could be extended by another five and then in 2006 modified to maximum fourteen years as such now women can be regular officers in aviation, logistics, law, engineering and executive cadres. In 2008 permanent commission was granted to women in the departments of Judge Advocate General and Army Education Corps. With the passage of time in 2015 women were approved to be inducted as pilots in all three wings of armed forces but still not allowed to serve in combat positions in Infantry, Armoured Corps and Artillery. In 2010, the Delhi High Court granted permanent commission to women serving as SSC, Indian Air force implemented the judgment but Indian Army challenged it in SC which gave historic verdict in 2020 upholding Delhi HC order with a clear cut order criticising mental barrier of confining women to only domestic household, parenting and family. Court also gave clear instructions regarding Command positions under Article 14, constitutional right to equality. Two years down the line selection board for men have been formed for promotions to Colonel rank but no board for women as such they again moved to SC with serious issues like they have to work under much junior batch wise men who have been promoted above them or they have been put at inconsequential positions or positions meant for much junior officers of the rank of Captain or Major or simply attached. They further alleged that they are denied study leave or deputation and are subjected to gender discrimination. SC has put the GoI on notice but the matter is really serious in many aspects against the no gender discrimination policy of GoI. Beti bachao beti padao is not a mere slogan but a movement to achieve everything for women. Why are these women officers made to approach courts for their due rights? It makes no sense as such it requires immediate intervention by GoI to set the things right, the sooner the better.