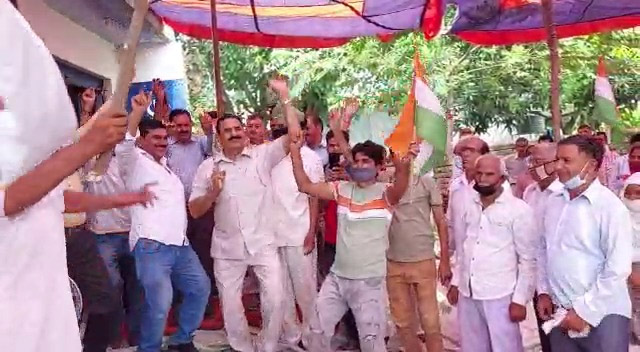 Jammu, August 5: West Pakistan refugees Thursday danced to the beats of dholak to celebrate the second anniversary of the abrogation of articles 370 and 35-A which resulted in them gaining citizenship rights in Jammu and Kashmir.
Led by Pakistan Refugees Action Committee president Laba Ram Gandhi, the men, women and children from the community converged in the border area and danced amid slogans of Bharat Mata Ki Jai.
“We are celebrating it as our Independence Day by unfurling the Tricolour because real independence in Jammu and Kashmir came to us on August 5, 2019,” Ram Gandhi told reporters here, referring to the day the Centre announced the abrogation of Article 370 and 35-A and its decision to divide the erstwhile state into two union territories.
The refugees, who now enjoy the rights of a bona-fide citizen, thanked Prime Minister Narendra Modi and Union Home Minister Amit Shah.
“We were living as unwanted citizens of Jammu and Kashmir. We had no rights, from voting to getting jobs. Now we are proud citizens of Jammu and Kashmir. Now our children will get all the rights,” Ram Gandhi said.
Till August 5, 2019, the refugees were barred from voting in all elections except for parliamentary polls.
The refugees, who migrated from parts of west Punjab and Gujarat that are now in Pakistan, were also barred from government jobs, scholarships and admission in colleges, welfare schemes, and right to own land.
The youths from the community are mostly illiterate and earn their livelihoods by working as labourers in agriculture fields in border belts of R S Pura, Samba, Hiranagar and Jammu, while the elderly work as domestic help.
After the scrapping of Article 370 on this day in 2019, West Pakistan refugees gained citizenship rights and can not only vote in local elections but also contest polls and enjoy all benefits as citizen.
Like them, Valmikis also celebrated the day with joy and happiness.
They converged on the Valmiki temple complex and celebrated by raising pro-India slogans and thanked prime minister for the decision.
Radical Gill, a Valmiki Samaj activist, said the abrogation of Article 370 came as a new lease of life to them. “We have got justice after many decades of fight. We thank PM for this big decision. We can now become who we want to.”
Another youth, Anadi Bhatti, said now he can become an advocate as article 370 is gone forever. “My dream will be fulfilled,” he said. (Agencies)