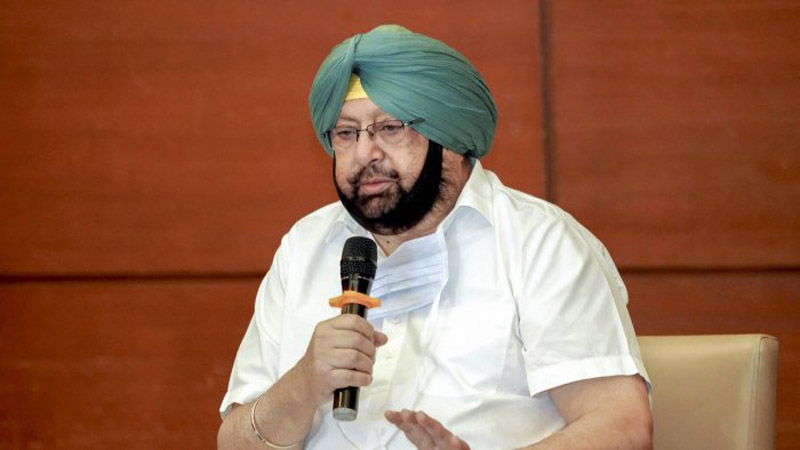 CHANDIGARH, Oct 27:
Former Punjab chief minister Amarinder Singh on Wednesday said he will launch his new political party when the Election Commission clears the name and symbol, and claimed that many people from the Congress are in touch with him.
“I am forming a party. But I cannot tell you the name right now. When the Election Commission (EC) approves the name and symbol, only then I can tell you. Let us wait for the EC to approve,” he said during his first press conference after resigning as the chief minister last month.
He also said that he will meet Union Home Minister Amit Shah on Thursday to continue his efforts to resolve the issues of farmers who have been protesting against the Centre’s three new agriculture laws.
Singh had resigned as the Punjab chief minister amid a bitter power tussle with Punjab Congress chief Navjot Singh Sidhu.
Responding to a question, Singh claimed many people from the Congress are in touch with him and that they will come out in the open when the time comes.
“Obviously many people are with us. We are waiting for the opportune moment. But I will not take their names as my supporters are already being harassed,” he said.
Asked how many MLAs are in touch with him, the former CM said, “If Rahul Gandhi needs to have back-to-back meetings with Punjab Congress MLAs, what does it mean?”
On not resigning yet from the Congress, he said, “I have spent 50 years in the Congress, how does it matter if I stay for another 10 days?”
Singh had last week said that he would soon launch his own party, and that he was hopeful of a seat adjustment with the BJP provided the ongoing farmers’ stir was resolved in their interest.
He also asserted that he had never spoken of aligning with the BJP, and that all he wanted was seat sharing.
“In military parlance, it means concentration of forces,” he said while stating that he had, however, not yet talked to the saffron party in this regard.
The leader further said he had no intention of aligning with the Shiromani Akali Dal (SAD), but only with breakaway Akali groups.
Asked about the reported refusal of SAD (Sanyukt) chief Sukhdev Singh Dhindsa to tie up with him, he said, “If Dhindsa has to put up a real fight, he will have to concentrate his forces too.
“To defeat the Congress, SAD and AAP, we all have to work as a joint force,” he asserted.
Meanwhile, Sidhu took another dig at Singh and called him the “negative force” stalling development in Punjab.
“We, the 78 MLAs of Congress, could never imagine, what we received an arm-twisted, ED controlled BJP loyal Chief Minister of Punjab @ capt-amarinder who sold the interests of Punjab to save his skin! You were the negative force stalling justice & development of Punjab,” Sidhu tweeted.
Singh, however, dismissed the tweet as “trash” and said the thought of seat sharing with the BJP came to his mind only after he was forced out of office.
“States have to work with the Centre to function effectively,” he pointed out.
“We will fight and defeat Sidhu from wherever he contests the upcoming assembly polls,” he said.
The former CM also alleged that ever since “Mr Sidhu came on the scene (took over Punjab Congress reins), our surveys show there has been a drop of about 25 per cent in the Congress’ popularity.”
Rejecting the Congress claims of a majority of party MLAs hvaing opposed his continuation in office, he said, “Once they (party leadership) had made up their mind to replace me, all these excuses were made.”
He added that the so-called 18-point agenda of the Congress for his government was nothing but part of the Punjab 2017 manifesto, adding that the Kharge committee, formed by the party to end factionalism, was clearly told that 92 per cent of the poll promises had been fulfilled.
Singh also dismissed allegations against his Pakistani friend Aroosa Alam. (PTI)
Even as he asked if Alam was the “only issue left in Punjab”, he questioned the intention of (Sukhjinder) Randhawa in raising the issue now after never mentioning it all these years.
Singh asserted that Alam had been visiting him for 16 years and he would definitely invite her again.
Punjab Deputy Chief Minister Sukhjinder Singh Randhawa had recently said that a probe would be carried out to ascertain whether Alam, a Pakistani journalist visiting Amarinder Singh for several years, has links with Pakistan’s spy agency Inter-Services Intelligence (ISI).
Amarinder Singh later shared with the media a booklet titled ‘Facts v/s Disinformation’, detailing achievements of his government from March 2017 till September 18, 2021.
On the political issues he will prioritise in the elections, the former CM said a manifesto committee will finalise the same.
Punjab goes to polls early next year. (PTI)