E-Paper
Home Todays story Will give autonomy to all 3 regions when voted to power:... 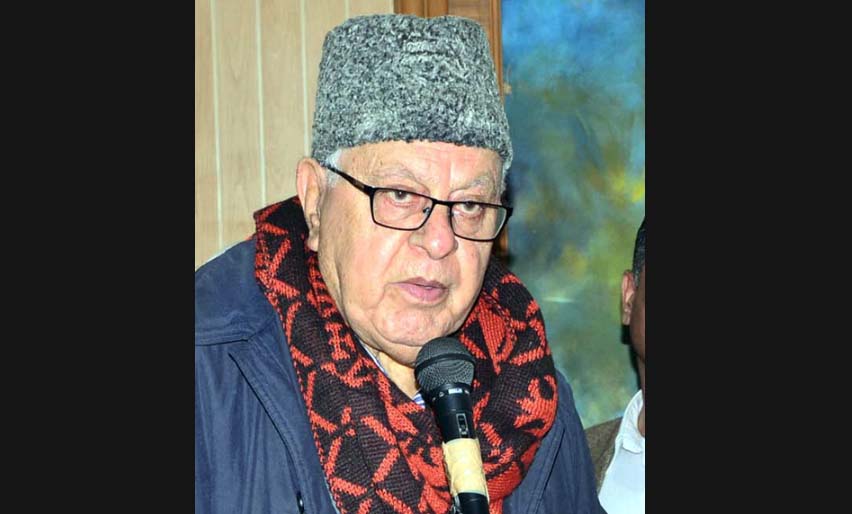 ‘Peace, amity need to be strengthened’

Excelsior Correspondent
JAMMU, Dec 20: National Conference president and former Chief Minister, Dr Farooq Abdullah today declared that if National Conference returned to power in the State after next Assembly elections, it will bring a resolution to grant regional autonomy to all three regions of the State-Jammu, Kashmir and Ladakh within 30 days.
Dr Abdullah was addressing a function at party’s headquarters at Sher-i-Kashmir Bhawan after joining of the National Conference by expelled BJP leader and former MLA from RS Pura, Gagan Bhagat.
“I want to make a promise that God willing if we form the next Government, we will bring a resolution to grant autonomy to the three regions (within 30 days),” Dr Abdullah said as he welcomed Bhagat into the NC fold and hoped that the party would be strengthened with his entry.

Farooq said the regional autonomy would work as a balm to the wounds of the people as every area would get its due representation.
“Regional autonomy is not there and it is going to be our first priority. Regional autonomy document is prepared and needs some improvements,” he said.
He added that Bhagat would strengthen communal harmony, brotherhood and the unity of the three regions of the State.
Abdullah said, “Many more leaders are in touch with the National Conference and they will join the party in coming days.”
Asked about the remarks of the State Governor Satya Pal Malik that section of the country’s upper class who do not do charity are like “rotten potatoes”, he quipped, “I don’t know which is rotten potato and good potato.”
At a function here, Malik had said “the big segment of society in this country, those who are wealthy – in Kashmir, politicians and bureaucrats are all wealthy – do not have any sensitivity towards society. They do not do charity of even a single rupee. But there are a few like this in the upper classes. Please do not take it badly, I consider them ‘rotten potatoes’, not human beings.”
On the issue of regional autonomy, Abdullah said the roadmap in this regard was drawn between 1996 and 2002 during his rule and its larger objective would be politico-economic empowerment of all the regions of Jammu and Kashmir.
“Jammu and Kashmir is a unique State that needs special dispensation in terms of autonomy to different regions to satiate urges and aspirations of the people,” the NC chief said.
He said a major ground work has been done in this regard with avowed objective of empowering the people at grassroots level and enabling them to take decisions as per their regional priorities.
“Such a mechanism under overall superintendence of the State Government will further strengthen the regional unity, which is imperative for singular entity of Jammu and Kashmir,” Farooq said.
Appreciating joining of Bhagat into the party, Abdullah exuded confidence that the people, especially those in political arena, would work towards maintaining the singular entity of Jammu and Kashmir which is under severe threat from “polarizing agents”.
“Peace and amity has to be strengthened at every level and this can be ensured only by strong National Conference, which is a mass movement.” he said.
In his brief address, Bhagat, a doctor by profession, thanked the NC and said he would serve the humanity and work for the uplift of the border residents, the poor and the downtrodden sections of the society.
He said he would work with dedication to strengthen the party at the gross-roots level.
Bhagat, a former MLA from the R S Pura constituency of Jammu district, was expelled by the BJP on December 10, the day the Supreme Court dismissed his petition challenging the dissolution of the State Assembly by Governor Satya Pal Malik, for “anti-party activities and indiscipline”.
Two days later, Bhagat came out in open against the State party leadership, accusing it of being anti-Dalit, following which the BJP issued a defamation notice to him for leveling “unfounded and abusive” allegations against State party president and State general secretary.
“People have given their mandate but got President’s rule,” he said, referring to BJP pulling out of the coalition Government which led to the fall of the PDP-led Government in the State in June and subsequent imposition of Governor’s rule.
Welcoming Dr Gagan Bhagat into the party fold, NC provincial president Devender Singh Rana described it as a reflection of deep urge among public spirited political activists to ensure a strong and stable Government in Jammu and Kashmir. He said the people are realizing crucial importance of clear mandate to a single party for giving the State a responsive and transparent dispensation.
“Leaders from different political parties are in touch with National Conference for joining”, Rana said, adding a realization is dawning fast about futility of the fractured mandate which has done much harm than any good to the State.
“This trend is to be arrested now by giving a massive mandate to National Conference, which has a track record of public service and undertaking holistic development of all the three regions of Jammu, Kashmir and Ladakh,” he said and expressed the hope that given the visibility of National Conference in every nook and corner of the State, the party will form the next Government on its own without crutches.
Led by National Conference district president Jammu Rural, senior party functionaries greeted Dr Bhagat on his joining the party.
Meanwhile, Dr Abdullah today visited the residence of Block President Nagrota and former Sarpanch Rameshwar Dutt and condoled demise of his wife Darshana Devi, who passed away today.
Accompanied by Provincial president Devender Singh Rana, the National Conference chief expressed sympathy with the bereaved family and prayed for peace to the departed soul.
Later, Rana, along with several National Conference leaders, participated in the last rites of Darshana Devi and expressed solidarity with the bereaved family.
Rana prayed for peace to the departed soul and strength to the members of bereaved family to bear this irreparable loss.