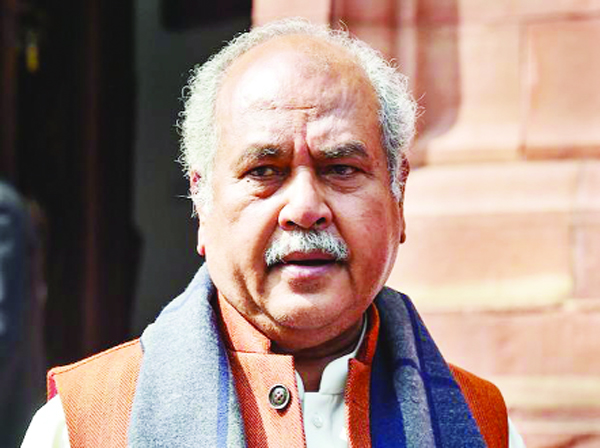 NEW DELHI, Feb 4:
The Government is committed to forming a panel on Minimum Support Price (MSP) and the Election Commission has said it can be done after the polls are over, Agriculture Minister Narendra Singh Tomar said in the Rajya Sabha on Friday.
While announcing the repeal of three farm laws in November last year, Prime Minister Narendra Modi had promised to set up a committee to discuss the farmers’ demand for a legal guarantee on MSP.
Replying to a supplementary question during the Question Hour, Tomar said the Government had written to the Election Commission in view of assembly elections in five states.
The Minister said the matter of forming the Committee on MSP is under consideration of the ministry and will be formed after the elections are over.
“The entire country knows that the prime minister has announced the formation of a committee to make crop diversification, natural farming and MSP effective and transparent.The Government is committed to the announcement made by the PM. The matter is under consideration of the ministry,” Tomar said.
The Minister’s remarks came day after the Samyukta Kisan Morcha accused the Government of not fulfilling its promise of setting up of the committee on MSP.
The Morcha also announced its Mission UP asking voters to punish the BJP for reneging on its promises to farmers.
Tomar said since the elections are on, the Government had written to the EC for its approval.
“The EC’s reply has come. It has said that the committee should be formed after the elections conclude,” the minister said.
Elections are scheduled in five states of Uttar Pradesh, Uttarakhand, Manipur, Goa and Punjab.
In his written reply, Tomar said, “As per the changing requirements of the country to change the cropping pattern, to make MSP more effective and transparent, and to encourage natural farming method of agriculture, the process of setting up a committee is under process.”
“At present, in view of the assembly elections in some states, the process of concurrence of the Election Commission for the formation of committee is under progress,” he said.
Replying to another query by Prasanna Acharya (BJD) who asked if the government is considering bringing a bill in this House to give a legal guarantee to MSP, Tomar said prior to 2018, there was no mechanism to define MSP and make farming profitable.
In fact, fixing MSP at 50 per cent higher than the cost of production was one of the 14 recommendations of the Swaminathan Committee that was rejected by the inter-ministry panel then, he said.
However, Prime Minister Modi accepted that recommendation in 2018-19 and started fixing higher MSP in the interest of farmers, he added.
With regard to bringing a law on giving MSP guarantee, the Minister said a committee on MSP will be set up after assembly polls in some states.
“Whatever the recommendations the committee will make, the government will examine them,” he said.
The Minister also informed that the MSP is an administrative decision and is being implemented for many years across the country, he said.
Noting that the Government’s MSP procurement has increased in the last seven years, Tomar said, “MSP has been doubled from the earlier times. In the current budget too, about Rs 2.37 lakh crore provision has been made for procurement.”
Replying to another query by Kanakmedal Ravindra Kumar (TDP) that if the Centre will take steps to stop farmers’ suicides in Andhra Pradesh due to lower procurement and MSP, Tomar said, “Farmers should get the right price for his produce. The Government is making efforts towards that…”
Asserting that the Government is committed towards procurement, he said ensuring MSP to farmers is one aspect, while helping them make farming profitable is another aspect for which they need to be supported. (PTI)