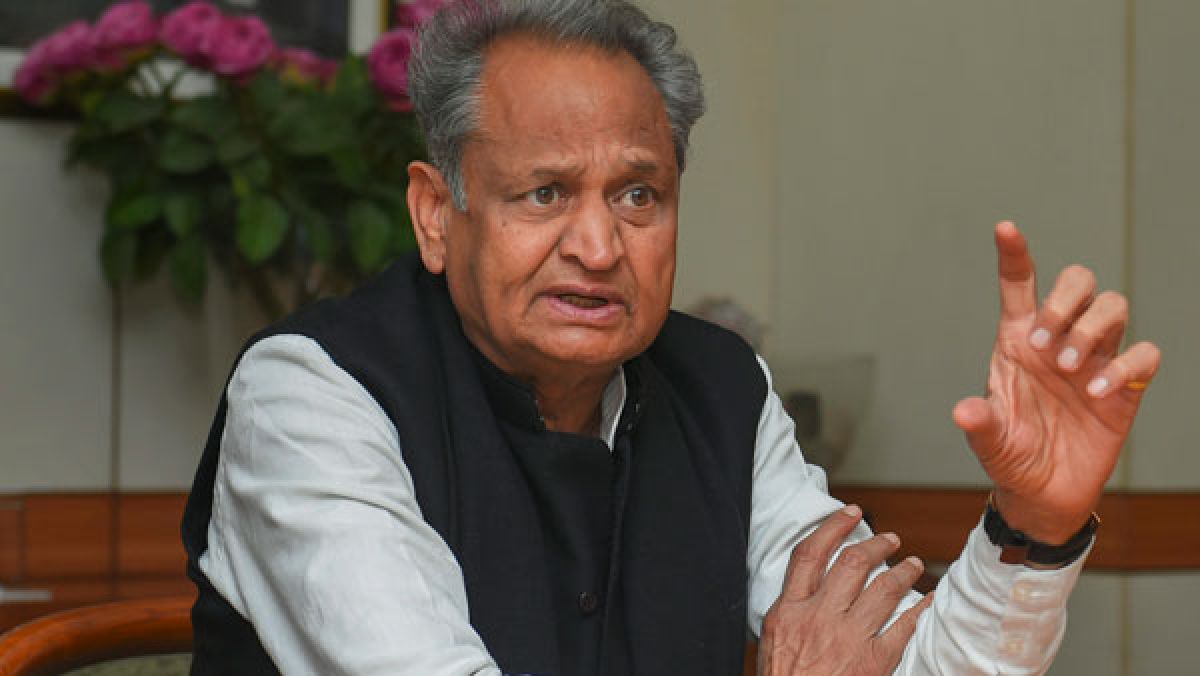 NEW DELHI, Sept 21: In a clear indication that he could throw his hat in the ring for the Congress president polls, Rajasthan Chief Minister Ashok Gehlot on Wednesday said he will file his nomination if his party people wish so and fulfil any responsibility given to him.
However, Gehlot, who is set to go to Kochi later in the day, said he will make one last-ditch effort to convince Rahul Gandhi to take up the party president’s post.
Speaking with reporters after landing here from Jaipur, Gehlot said he will take decisions with which the Congress is strengthened.
“The party and high command have given me everything. I have been on posts for 40-50 years. For me no post is important, I will fulfil any responsibility given to me,” he said.
He also asserted that not only the Gandhi family, but scores of Congress members have faith in him.
“I am very fortunate that I have got love and affection of Congress men and women across the country and they have faith in me,” Gehlot said.
“Therefore, if they ask me to fill the form (nomination), I will not be able to refuse…Will speak with friends. I was given the responsibility of being Rajasthan chief minister, I am fulfilling that responsibility as a CM and will continue to do so,” said Gehlot, who was here to meet party chief Sonia Gandhi.
On whether keeping both posts of the CM and party president could be a violation of the party’s pledges in Udaipur, Gehlot said that applies when the high command nominates people, while the president polls were an open election and anybody among the 9,000 PCC delegates, irrespective of whether that person is MP, MLA or minister, can contest.
Citing an example, he said if a minister in a state stands for Congress president election, that person can stay minister and also contest polls.
“Time will tell where I remain. I would like to stay where the party benefits from me, I will not back down,” he asserted when asked if he would remain CM along with being party chief.
Gehlot said he wants to serve the Congress, wherever he is useful, be it Rajasthan or Delhi.
“Party has given me everything, post is not so important for me. If it is up to me, I would not take any post, I would join Rahul Gandhi in the Bharat Jodo Yatra looking at the situation in the country, the Constitution is being destroyed, democracy is in danger. They (the BJP) are destroying the country,” he said.
The UPA rule was unparalleled, the BJP won elections using religion and is now destroying the country, he alleged.
He said if the Congress people want him in the role of CM or as president of the party, he will not be able to turn down their request.
Asserting that it is important to strengthen the Congress for the sake of the country, Gehlot said he would do wherever is required for that and would not back down.
Asked about a prospective contest with Shashi Tharoor for the party chief’s post, he said contest should take place as it is good for internal democracy of the party.
“Rajnath Singh became BJP president, then Amit Shah became president then Nadda ji, was it discussed. We are fortunate that the media only talks about the Congress (polls),” he said.
Gehlot said he will try to convince Rahul Gandhi one last time to take on the post of party chief. If Rahul Gandhi carries out the Bharat Jodo Yatra being president of the Congress, it will add to the aura of the party, Gehlot said. Later, an official spokesperson said Gehlot will attend an event in Mumbai on Wednesday and reach Kochi on Thursday to join the party’s Bharat Jodo Yatra.
The chief minister will offer prayers at Shirdi’s Sai Baba Temple on September 23 and after attending local events in Maharashtra will return to Jaipur.
Meanwhile, Tharoor, who is set to contest the polls, met party central election authority chief Madhusudan Mistry at the AICC headquarters in New Delhi.
The process for filing nominations for the election will be held from September 24 to 30.
The date of scrutiny of the nomination papers would be October 1, while the last date of withdrawal of nominations would be October 8.
The election, if there is more than one candidate, will take place on October 17, while counting of votes, if necessary, and the counting of votes and the declaration of results would be on October 19. (PTI)