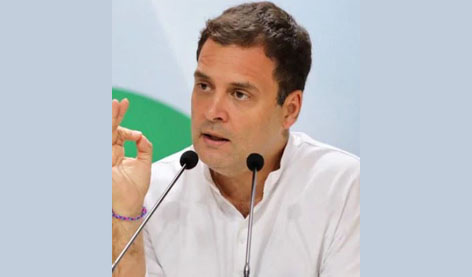 NEW DELHI, Aug 6:
Continuing his attack on Prime Minister Narendra Modi on the India-China border standoff, Congress leader Rahul Gandhi on Thursday pointed to a new Defence Ministry document on Chinese transgression in the areas of Kugrang Nala and north bank of Pangong Tso in May 17-18 and asked why the PM was lying on the matter.
In a post on the social media, Mr Gandhi said, ”Why is the PM lying.?
He also posted on his Twitter account, a report of a national daily which quoted a defence ministry document as saying that the Chinese side transgressed in the areas of Kugrang Nala (near Patrolling Point-15, north of Hot Springs), Gogra (PP-17A) and north bank of Pangong Tso on May 17-18.
The official ministry document on the major activities in June said Chinese aggression has been increasing along the Line of Actual Control (LAC) and “more particularly” in the Galwan valley since May 5.
The Chinese side transgressed in the areas of Kugrang Nala and Gogra in the Hot Spring area and the northern bank of Pangong Tso on May 17-18, it added.
The document also mentioned that a violent face-off took place in Galwan Valley between two sides on June 15, resulting in casualties on both sides.
The Defence Ministry said that the situation in eastern Ladakh arising from “unilateral” aggression by China continues to be “sensitive”, and requiring close monitoring and prompt action based on evolving situation.
The Ministry also said that the situation is likely to be prolonged. It is pertinent to mention here that 20 Indian soldiers were killed in a violent clash between the Indian and Chinese forces. The Chinese side also suffered a massive casualty but the Chinese authorities have yet not revealed any numbers.
Mr Gandhi and the Congress party have been constantly attacking the PM and the NDA Government on the India China border standoff and have accused the government of failing to check the Chinese incursions on the Indian territory. (UNI)