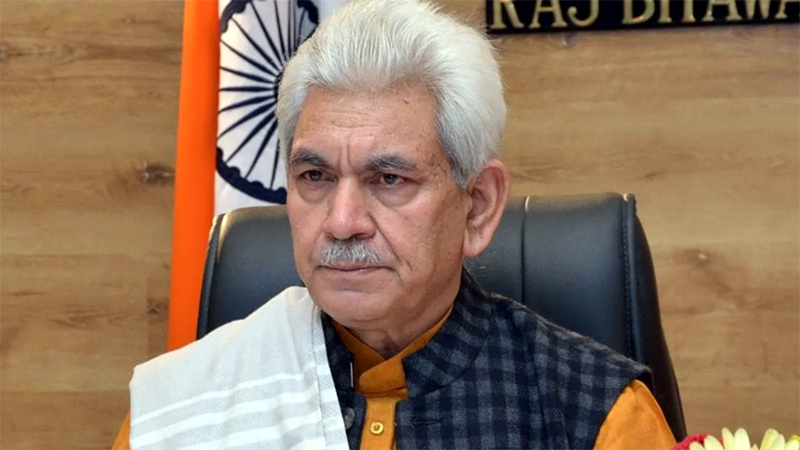 Industrial Scheme to be taken right up to block level

Everything was hotchpotch in recruitment, we restored transparency

Sanjeev Pargal
JAMMU, Dec 19: Lieutenant Governor Manoj Sinha said today that whosoever involved in the killing of police personnel or giving shelter to the killers in Srinagar few days back will be taken to task and sacrifices of the martyrs won’t go waste.
Addressing 9th episode of ‘Awaam Ki Awaaz’, a monthly Radio Programme aired on every third Sunday of the month, Sinha referred to the martyrdom of police personnel and offered tribute to them. He assured that whosoever involved in the killing of cops and providing shelter to the killers will be given befitting reply.
“I assure you that sacrifices of the martyr jawans won’t go waste,” he said, adding those involved in the attacks are trying to break unity and integrity of the nation will never succeed in their designs.
Asserting that complete transparency has been restored in Government recruitments, the Lieutenant Governor said he need not to tell how the Government jobs were given in Jammu and Kashmir earlier.
“I don’t want to name person or place but you know what kind of work culture was adopted here. We got all this in legacy. However, now the jobs are being given completely on the basis of merit,” he added.
Sinha said 11,000 recruitments have been completed on the basis of merit while 20,000 more jobs are being advertised,
“A Committee has been set up to identify the Government jobs in various departments and submit them to recruitment agencies. All recruitments will be made on merit,” he added.
The Lieutenant Governor announced that the Industrial Development Scheme will be taken right up to block level for development of villages.
He expressed confidence that 2022 will bring fast paced development in Jammu and Kashmir which will benefit everyone.
Sinha paid homage to the brave hearts of Armed Forces whose tales of valor etched the saga of December 16 as a glorious chapter in the rich legacy of the nation
He shared a slew of measures recently taken by the UT Government for growth and prosperity of J&K. He called upon the people to discharge their social & moral responsibilities and complement Government’s efforts in taking J&K to new heights of development.
“Following the ideals of former Prime Minister Atal Bihari Vajpayee, we are moving ahead to bring about meaningful and lasting change in the life of the people by connecting every citizen with the mainstream of development, Sinha observed.
He said during the last two years, under the guidance of Prime Minister Narendra Modi, the Government has tried to create a system that serves everyone with equal opportunities.
“It is our endeavor to mobilize all the resources to improve the standard of living in the areas which have been deprived of progress for decades,” he added.
The Lt Governor highlighted various measures being undertaken by the Government for improving the standard of living of common citizens in Jammu city. As many as 39 important projects have been completed under Smart City at a cost of Rs. 673 crore and work on 45 other projects are going on at a fast pace, he informed.
He extended his heartfelt tribute to the Chief of Defence Staff, General Bipin Rawat, his wife, and all the officers and jawans who lost their lives in a tragic chopper crash. He also paid homage to the brave hearts of the Police Force who were martyred in the cowardly terrorist attack on J&K Police bus in Srinagar.

Unified Hqrs meet tomorrow
The Unified Headquarters is likely to meet here on December 21 to review prevailing security situation in Jammu and Kashmir including the hinterland as well as Line of Control (LoC) and International Border (IB).
The UHQ meeting will be chaired by Lieutenant Governor Manoj Sinha and attended by entire top brass of Army, civil administration, BSF, CRPF, JKP and Intelligence agencies.
The meeting will discuss threadbare the prevailing situation in the Kashmir valley in the wake of intensified militant attacks on police and earlier the minorities and non-locals.
Intensification of anti-militancy operations will also figure, reliable sources said. The meeting is expected to last three hours.