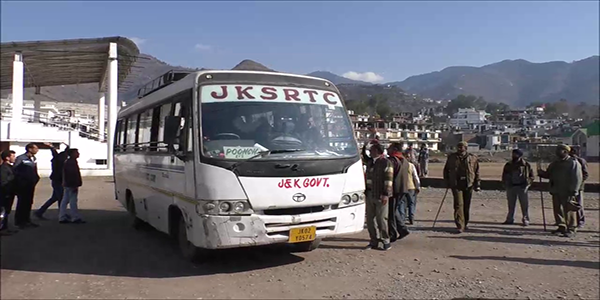 JAMMU,: After remaining suspended for a week following the Pulwama terror attack, the weekly cross-LoC bus service resumed on Monday in Poonch district, with only 17 passengers availing the facility, officials said.

No fresh Pakistan-Occupied Kashmir (PoK) resident came here, apparently in view of the ongoing tension between India and Pakistan following Pulwama terror attack in which 40 Central Reserve Police Force personnel were killed on February 14, they said.

The officials said, while 13 passengers, including 11 PoK residents crossed over to the other side from the Chakan-da-bagh crossing point in Poonch district, only four Indian residents walked into this side after the gates were opened.

The bus, connecting Poonch on the Indian side with Rawalakot in PoK, plies on Monday every week but did not cross the Line of Control (LoC). The passengers on either side reached the LoC by bus and then exchanged sides by foot to meet their relatives.
(AGENCIES)