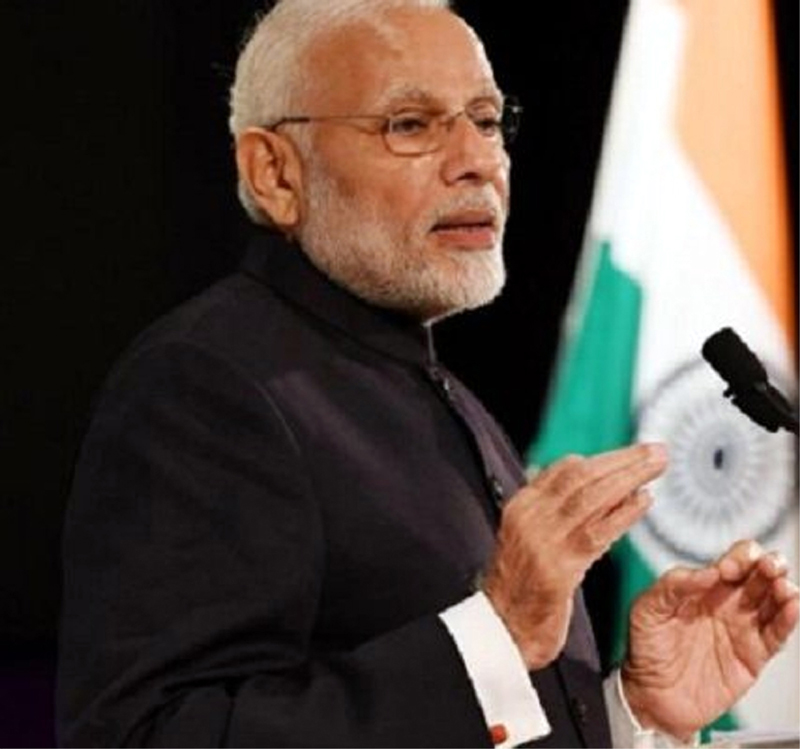 CHENNAI, Jan 13:
Prime Minister Narendra Modi today derided opposition efforts to cobble up a grand alliance against the BJP and pitched for his party’s re-election in the coming Parliamentary election, saying these “opportunistic” alliance and “dynastic” parties “want to build their own empire while we want to empower people”.
During an interaction with booth-level BJP workers from five Parliamentary constituencies in Tamil Nadu via video-conference, Modi said, “Unlike other parties, we are not in politics for divide and rule or building vote banks. We are here to serve the country in every possible way.”
“On one hand we have our development agenda and on the other, there are opportunistic alliance and dynastic parties. This election is an opportunity for us to take the agenda of development to new heights. On one hand we have our development agenda and the vision of sabka saath sabka vikas. On the other hand, there are opportunistic alliance and dynasty parties,” he said.
Such parties, the Prime Minister charged, “want to build their own empire while we want to empower people”.
Modi’s comments came a day after the Samajwadi Party and the Bahujan Samaj Party announced their alliance for the coming Lok Sabha polls in Uttar Pradesh in a bid to counter the saffron party.
Billing his party as one that recognised the cultural diversity of the country, he also patted his party workers and exuded confidence they will once again ensure its victory in the coming elections.
A BJP worker is driven not by any self-interest but national interest, he said, adding only in the saffron party can a person born in socially backward and economically poor family think of reaching the top.
“In the BJP one only needs hardwork, not big wallets, high birth or loyalty to one family. We are proud that a party with two MPs (to start off with) is ruling so many States and is running the Government at the Centre,” Modi said.
He said that the BJP’s success has “naturally angered so many people who have done nothing but done negative politics,” and have been abusing both the party and himself, the Prime Minister said.
“But they should not underestimate the people of India. Our friends in the opposition are anyway a confused lot. They leave no opportunity to say Modi is bad, Government is not working, people dislike the BJP….The first thing that they do is make opportunist alliance with parties they disliked till recently and still do perhaps,” he said, without naming anyone.
“If Modi is so bad, Government is not working and if the people dislike the BJP then why build these alliance. Should you not be confident about yourself. The truth is they know it is a working Government, that the poor of India, the youth of India, the farmers of India and the women of India have a strong bond with the BJP.”
“Hence, for their own existence they are making short-term alliance,” he said during the interaction with party workers from Mayiladuthurai, Sivaganga, Perambalur, Virudhunagar and Theni Parliamentary constituencies as part of his ‘Mera Booth, Sabse Mazboot’ (My booth is the strongest) initiative.
Taking a dig at the previous UPA Government, he said it had built only 25 lakh houses in its last five years under a housing for poor scheme, whereas the present government has constructed 1.25 crore houses in four years.
“In the previous Government, for them the name of schemes was important, not their functioning. For them houses were means of publicity, for us they are means of poverty elimination. Earlier, whatever schemes were made were only on paper. No one knew how many real beneficiaries existed,” he said.
Responding to a question on the MSME sector, Modi hailed the role of small industries in the nation’s growth.
The Government’s commitment to MSME sector can be proved by the fact that 15 crore collateral-free Mudra loans have been provided to entrepreneurs.
“Many people think ease of doing business only helps big companies. This is a completely wrong perception. Ease of doing business helps the MSME sector and small businesses most,” he said.
To a question on GST, he said that the Government has from day one of its roll-out been saying that it will improve the new taxation system as “we move ahead” and recalled the various sops being given from time to time, including the latest one where the exemption for suppliers for registration and payment of GST has been raised from Rs 20 lakh to Rs 40 lakh.
“This will help a large number of MSMEs. Free accounting and billing software will also be provided to taxpayers. Making business easier also means devoting special focus where it is needed,” Modi said.
“It would be have been tough to imagine India will one day leave even China behind in attracting foreign direct investment. Let me tell you, India has already surpassed china in 2018 in FDI,” the Prime Minister said.
The “tallest” Statue of Unity of Sardar Vallabhbhai Patel was a model of India’s design prowess and showed nothing is impossible, he said.
“We are changing all the assumptions that the world had about India, we had about ourselves. If this is possible in four years after we had inherited a mess, think what we can do in the next five years,” he said.
Asked about first time voters ahead of this year’s polls, Modi asked his party workers to “make them your first priority” as they decide the future. “The BJP is a natural choice for first time voters,” Modi added. (PTI)