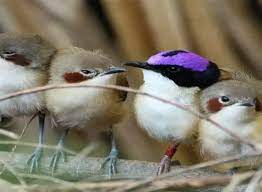 Melbourne, June 14:Extreme heat waves can cause birds and mammals to die en masse. But it’s more common for an animal to experience relatively mild heat stress that doesn’t kill it. Our new findings suggest that unfortunately, these individuals can suffer long-term health damage.
Our study, published today, describes how exposure to hot and dry conditions can damage the DNA of nestling birds in their first few days of life. This can mean they age earlier, die younger and produce less offspring.
We focused on a population of purple-crowned fairy-wrens – a small endangered songbird from Northern Australia.
The findings suggest unless the wrens can adapt rapidly to climate warming, their populations may struggle to survive as global temperatures rise. It’s vital we consider such subtle and otherwise hidden impacts when predicting how biodiversity will fare in a warmer world.
The cost of growing up in the heat
Nestlings are particularly sensitive to hot temperatures due to their immobility, rapid growth and immature physiology. And the consequences of heat stress are potentially amplified in young birds because damage may persist into adulthood.
We intensively monitored a population of individually-marked purple-crowned fairy-wrens at the Australian Wildlife Conservancy’s Mornington Wildlife Sanctuary in Western Australia’s Kimberley region, as part of our long-term ecological study.
These insect-eating birds form small social groups centred around a breeding pair. The birds we monitored spend their lives in dense vegetation beside their particular spot along a riverbank, which they enthusiastically defend from interlopers.
Breeding can occur all year but peaks in the monsoonal wet season. Nests contain between one to four nestlings. During our study they experienced maximum air temperatures between 31-45 degree Celsius.
Our investigation focused on week-old nestlings, and the relationship between temperature and a section of the birds’ DNA known as “telomeres”.
Telomeres are DNA caps on the end of chromosomes which, among other functions, act as a buffer to protect cells from the byproducts of energy production and stress. Once this buffer erodes, the cell shuts down. As the number of these inactive cells builds up over time, the ageing process accelerates.
Nestlings exposed to hot, dry conditions during their first days of life had shorter telomeres. This suggests surviving heat stress may shorten their protective DNA buffer and make the birds age more quickly. Indeed, our previous research demonstrated nestlings with shorter telomeres tend to die younger, and subsequently have fewer offspring.
Interestingly, nestlings appeared to tolerate heat better when it coincided with rain, although we’re not sure why.
What this means under climate warming
Hot, dry conditions are predicted to become more frequent in Australia under climate change. So we built a mathematical model to simulate whether their effects on nestling telomere length may depress reproduction enough to cause population decline.
We found even under relatively mild rates of warming, the population could decline solely as a consequence of nestling telomere shortening. The maths also revealed two potential “escape” measures that might maintain population viability.
First, the population could evolve longer telomeres, and thereby a larger buffer to prevent early ageing. However, this is entirely speculative as we do not understand how telomeres evolve or whether their evolution could keep pace with climate change.
Alternatively, the birds could adjust when they breed, so nestlings experience wet conditions more often. However, this seems unlikely because the number of rain days in the region is forecast to decline, and the birds already try to maximise breeding when it rains.
Importantly, if global warming continues to accelerate, the success of any countermeasures becomes increasingly unlikely.
Concealed and delayed costs of heat exposure, such as those identified in our study, can be subtle and difficult to detect. But they’re crucial when considering how climate warming might affect biodiversity.
Given that developing animals are generally more sensitive to heat, and telomeres function in similar way across species, our results could extend to many other birds and mammals. More research is needed to confirm this.
What’s next?
Keeping cool is also costly for parent birds. Like us, birds often seek out shade and become less active in extreme heat. Instead of sweating, they open their beaks to pant and spread their wings to cool off.
But these behaviours leave a parent bird with less time to forage, defend the nest or feed offspring – activities required for the population to survive. We are investigating whether this exacerbates the effects of telomere shortening.
Next, we plan to expand our research by measuring temperatures in and around the nest. We’ll also study whether females are able to select cooler microsites to help their young better withstand climate warming, and investigate how this relates to habitat quality, management and threats.
Ultimately, we hope our research will inform the design of conservation strategies to climate-proof the future of this iconic Australian bird and others like it. (The Conversation)
(AGENCIES)