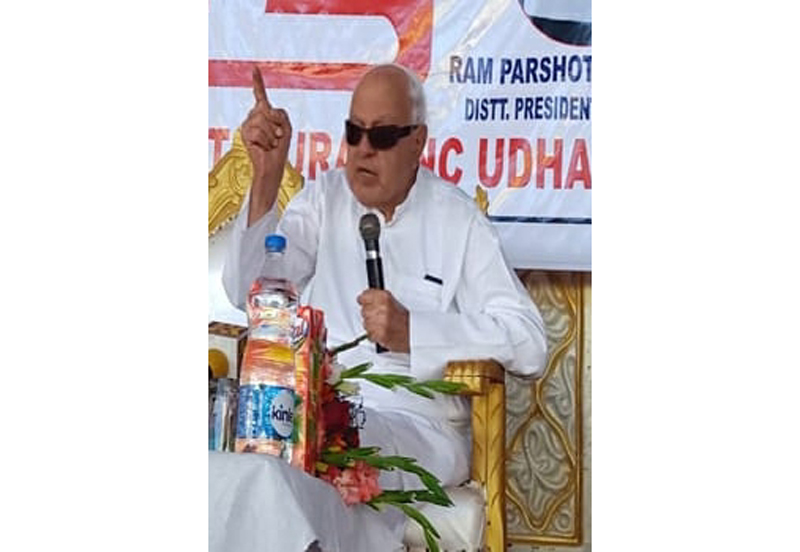 JAMMU, Mar 7: Rejecting Government claims of development and improved security situation after August 5, 2019, National Conference President and Member of Parliament, Dr Farooq Abdullah today reiterated the demand for restoration of Article 370 for safeguarding identity of Jammu and Kashmir.
“We are better Indian but want restoration of Article 370 to safeguard our identity and protect our land,” he said while addressing NC workers at Udhampur today.

Click here to watch video
Echoing apprehensions in the minds of the people of Jammu and Kashmir about their lands and jobs going in the wake of August 2019 political developments, the NC chief said that Article 370 was not just a Kashmir centric issue, it was as much important to the regions of Jammu and Ladakh as well. “To save the people, especially those of Jammu from the hegemony of the elite and affluent from the neighbouring States, Maharaja Hari Singh had brought this law in 1927,” he reminded.
Dr Farooq strongly contested the Government claim of ushering new era of development and improvement in security scenario after abrogation of J&K’s special status. “They (Govt) said there would be jobs, development and the terrorism will come to an end. But where are the jobs ? Is there any development? Terrorism has increased and there are more security forces everywhere,” he added.
The former Chief Minister recalled the then Leader of Opposition in Rajya Sabha, Ghulam Nabi Azad’s speech in the House when he had made comparison between J&K and Gujarat explaining how Jammu and Kashmir was more developed and better under Article 370.
Stressing the need for a thaw in the relations between India and Pakistan, Dr Farooq said this will hugely benefit the people of Jammu and Kashmir. “Hostilities on borders bring only agonies and miseries to the dwellers, halt agriculture and economic activities, and impact the way of life of every segment of society”, he said.
Referring to the recent reiteration by India and Pakistan to abide by ceasefire agreement in letter and spirit, Farooq Abdullah said the people of Jammu and Kashmir wish and pray for success of this measure, as it will bring some sort of relief to them. He said both the countries are spending a substantial portion of budget on defence procurements thus depriving welfare of their poor populations.
Invoking the words of former Prime Minister Atal Bihari Vajpayee that “you can change your friends but not your neighbours”, Farooq Abdullah said that either the two countries have to grow friendship and prosper or continue the enmity and then there will be no prosperity.
Exhorting the party cadre to reach out to the people, the NC chief said it is the people who can change and shape their own destiny. He said the massive support despite numerous challenges reflects the deep faith of the people in the National Conference, which has all along cherished the great values of the pluralistic ethos that has actually been a binding force between the regions and religions. “We have to maintain, sustain and promote this spirit for making Jammu and Kashmir a better place to live in”, Dr Farooq said.
Provincial President Devender Singh Rana accompanied Dr Farooq Abdullah in the public meeting, which was organized by District President Udhampur Rural, Ram Parshotam Sharma. Ch Mohammad Shafi and Sunil Verma , District President Udhampur Urban, also spoke on the occasion.