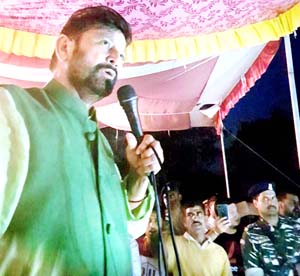 JAMMU, June 14: Former minister  and senior BJP leader  Ch Lal Singh said that Jammu is passing through  historical phase which would go a long way in deciding the destiny of this land of Dogras and those watching silently will  not be spared by people.
Addressing public meetings at Bhamla and Pouni in Reasi today, Lal Singh said  those  who have given-up and are content with grave discriminatory and biased attitude of the Kashmir based political parties will not be forgiven by people and the future generations.  “They will ask you where were you when we were called ‘Pro-rapists’. They will ask you why you remain silent and preferred staying home over participating in the movement for change,” said Ch Lal Singh.
“How unfortunate is it that while no one in Kashmir demanded yet CBI was called in 6 times to investigate cases where people had doubts on the story of the state police, we are demanding and we are being denied the same? Why? Isn’t this gross violation of the human rights? Isn’t this blatant discrimination? If the state cares about the sentiments of the people of Kashmir valley, why should not people of Jammu region feel alienated and discriminated?” Ch Lal Singh said.
“How pathetic is it that a State which takes pride in talking about women empowerment has not even once looked at women sitting under the shade of a tree along the National Highway demanding that Rasana case be handed over to the CBI. A large number of gathered in Londi  Morh, Hiranagar on May 16 and demanded CBI inquiry. Youngsters took out a Mashaal rally and are planning more such rallies in the days ahead. Their only demand is CBI inquiry into the Rasana case. And the Government is getting regular updates yet it acting deaf and dumb deliberately,” said Ch Lal Singh.
“I am reminded of how an ex-Chief Minister who spends most of his time on twitter called in CBI for almost every case where people had doubts in investigation in Kashmir valley and how he tweeted on April 9, 2018; “Shame on them and their political masters” for those Dogras who were protesting against the State Government for its refusal to order CBI inquiry into the Rasana case. He is the same person who ordered CBI probe into the Shopian case and later, accepted its findings.  Lal Singh appealed the people of Jammu region to participate in large Mashaal Rally being held on June 27 at Gandhi Nagar, Jammu.