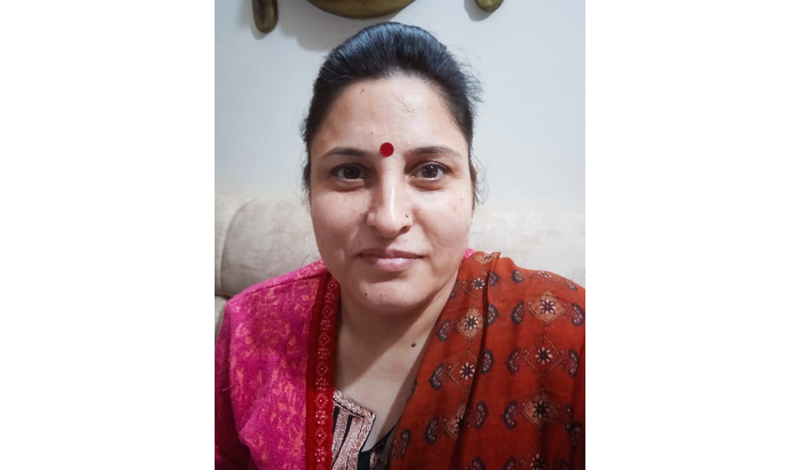 JAMMU, Dec 1: The menace of stray dogs, flooding of Nallahs, hanging wires and damaged poles dominate the problems which the people of Ward number 24 of Jammu Municipal Corporation (JMC) face as the expectations from the elected Urban Local Body (ULB) were not met even after more than four years of the formation of the ULB.
This was informed by JMC Councillor, Anu Bali from Ward number 24.
She also said that stray dogs not only spread litter in the Ward and panic the women, children and elders, but also chase two-wheelers which may cause some mishap.
“Even a toddler was killed by these canines few weeks back in my Ward,” Bali, who is an Independent and first time Councillor told the Excelsior in an exclusive interaction.
She said that a big Nallah in her Ward at Hari Singh Nagar overflows in every rainy season after getting blocked and the gushing water enters adjoining houses inflicting damages.
The JMC Councillor further informed that 150 meter stretch of another Nallah at Lower Green Enclave adjoining Rajpura has been left incomplete by UEED and it gives bad smell and bad look and disturbs the adjoining residents as the agency concerned has not worked properly there.
Anu Bali said that areas of her Ward include the entire portion from Rehari Chungi Gurudwara to J&K Bank near Subhash Nagar and from Rajpura Church to Captain House near Green Enclave, Baddi, half of Shopping Centre area near Bakshi Nagar, back side of Gurudwara Kalgidhar Sahib, Rehari Colony areas like Hari Singh Nagar, Panchi Nagar and Board of School Education.
The Councillor claimed that hanging wires and damaged poles are there in her Ward and despite bringing the issue into the notice of concerned authorities nothing has been done to correct these wires and remove such poles.
“Blacktopping is complete in my Ward barring few areas at Green Enclave and near Baby Caterers,” she maintained.
Bali said that repair and construction work of lanes and drains in her Ward has been almost complete and a little of it has been left only due to paucity of funds.
She said that open drainage system in her Ward needs to be covered.
“Though Street Lights have been installed in a good number in the Ward but still some more lights are needed and the non-functional Street Lights are not being repaired timely by the agency concerned,” Bali said.
She claimed that some 7-8 houses in her Ward do not get proper water supply due to their location at the tail end and at few places the old water supply pipes have not been replaced.
Bali said that an Over Head Tank is needed in the Ward which the authorities concerned may construct at the Government School situated in the area or at any other appropriate place in the Ward.
“Some water coolers were placed in the Ward by JMC but so far no water connections has been given to them for years together and the warranty of such Water Coolers has even expired by now,” the JMC Councillor said.
She informed that there is no park, no playground, no public toilet and no parking area for vehicles in her Ward while there is a Community Hall at a Church on which the JMC has spent Rs. 40 lakh.
“Sewerage project has created a lot of problems in my Ward. The agency concerned with the project broke the lanes and roads and failed to repair these properly and the sewerage pipes even get frequently blocked at many places due to which the litter comes out from the manholes and spreads on the roads and streets leaving problems for the passersby and locals. Even those who are supposed to correct the block take a lot of time to do this work of urgent nature despite repeated calls to them and at some places the sewerage connections have also not given to households,” she continued.
The Councillor said that there are 22 Safai Karamcharis in her Ward but there is a need of 15 more for maintaining proper cleanliness in the area though the Ward is not dirty.
“Autos collecting garbage from door-to-door are doing a good job and due to this service most of the garbage dumps have been removed from the Ward but the only dump now remained is the one near army camp,” Councillor Anu Bali said.
“Smart Meters have been installed in the Ward and there is no problem due to these now but there is encroachment of lanes by most of the houses which have constructed stairs in public lanes,” she continued.
The Councillor informed that cases of thefts involving iron gratings from the drains have been reported from the Ward while there are many drug addicts and peddlers also active in the area for which the police should take a cognizance.
“Though I have helped many widows, old age and physically challenged persons in getting pension but the newly introduced rule for these pensions exclusively to below poverty line people is creating problems for others now,” the JMC Councillor further said adding that almost all the people in her Ward have now got Ayushman Cards while all the eligible Voters have got Voter Cards and Domicile Certificates.
“During the last more than four years of my tenure I have organized many health camps in my Ward where free check-up and free medicines were provided to the needy people,” she said.