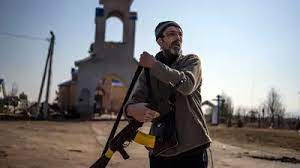 Lviv, Mar 26: For a month now, Russian forces have repeatedly attacked Ukrainian medical facilities, striking at hospitals, ambulances, medics, patients and even newborns — with at least 34 assaults independently documented by The Associated Press.
With every new attack, the public outcry for war crimes prosecutions against Russian President Vladimir Putin, his generals and top Kremlin advisers grows louder.
To convict, prosecutors will need to show that the attacks are not merely accidents or collateral damage.
The emerging pattern, tracked day by day by the AP, shows evidence of a consistent and relentless onslaught against the very civilian infrastructure designed to save lives and provide safe haven to Ukraine’s most vulnerable.
AP journalists in Ukraine have seen the deadly results of Russian strikes on civilian targets firsthand: the final moments of children whose tiny bodies were shredded by shrapnel or had limbs blown off; dozens of corpses, including those of children, heaped into mass graves.
“The pattern of attacks will help prosecutors build the case that these are deliberate attacks,” said Ryan Goodman, professor of law at New York University and former special counsel at the US Department of Defense.
“Prosecutors will draw inferences from how many medical facilities were targeted, how many times individual facilities were repeatedly struck and in what span of time.” Deliberate attacks on hospitals will likely be a top priority for war crimes prosecutors.
This accounting of attacks on medical facilities is part of a larger effort by the AP and the PBS series Frontline to track evidence of potential war crimes committed during one of the largest conflicts in Europe since the end of World War II.
The War Crimes Watch Ukraine project launched by AP and Frontline includes details of apparent targeted attacks as well as indiscriminate destruction of civilian buildings and infrastructure. The AP/Frontline online database will continue to be updated as long as the conflict lasts. The goal is to provide an independent accounting of events, apart from potentially inflated claims by advocates or misinformation spread by state-backed propaganda. (AP)