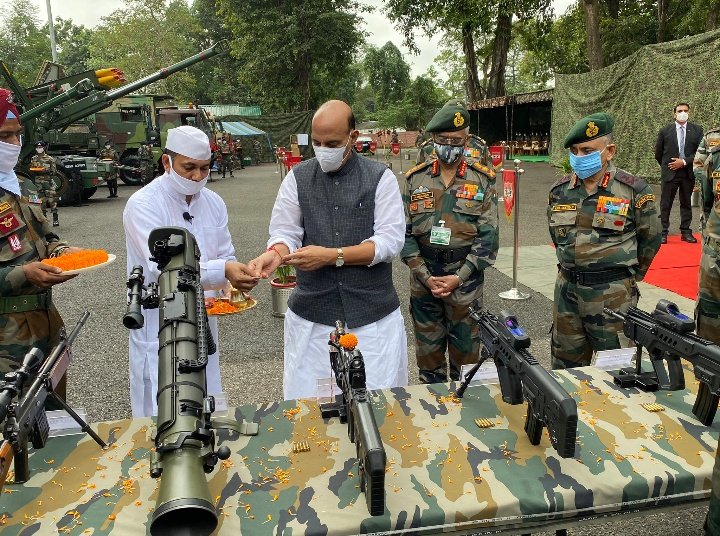 NEW DELHI: Defence Minister Rajnath Singh has said India wants peace along its border with China. He made the statement after performing “Shastra Puja” – the customary worship of weapons – at Sukna War Memorial in Sikkim’s Darjeeling, on the occasion of Dussehra today.
He was accompanied by army chief General Manoj Mukund Naravane, besides other officers and jawans.
“India’s brave soldiers have sacrificed their lives (for India’s safety). We want that the Indo-China border tension should end and peace should be preserved. But unpleasant incidents keep happening. However, I am confident that our soldiers will not let anyone take even an inch of our land… History will remember the courage of Indian soldiers,” Rajnath Singh said after the ceremony.
He worshiped weapons, equipment and armoured vehicles as a priest chanted prayers in Sanskrit.
The “Shastra Puja” near the Line of Actual Control or LAC with China comes amid the standoff with the neighbouring country in eastern Ladakh. A tense confrontation between Indian and Chinese soldiers also took place in north Sikkim in early May.
The Defence Minister – on a two-day visit to West Bengal and Sikkim to review the preparedness of the forces along with the army chief – also inaugurated the Alternate Alignment Gangtok-Nathula Road via video conferencing from the Sukna-based headquarters of 33 Corps, which guards the de-facto border with China in the Sikkim sector.
On Saturday, Mr Singh reviewed the combat preparedness of the Indian Army at Sukna, officials said. The Defence Minister and the army chief were also briefed about the situation along the border in Sikkim sector.
The army has significantly strengthened its troops and weaponry along the nearly 3,500 km-long border with China, including Sikkim and Arunachal Pradesh sectors, given that tension in Ladakh has shown no sign of easing. The standoff continues despite several rounds of high-level talks, taking Indo-China ties to a new low.
Mr Singh has been performing Shastra Puja on Dussehra for the last several years including during his tenure as the Union Home Minister in the previous National Democratic Alliance (NDA) government.