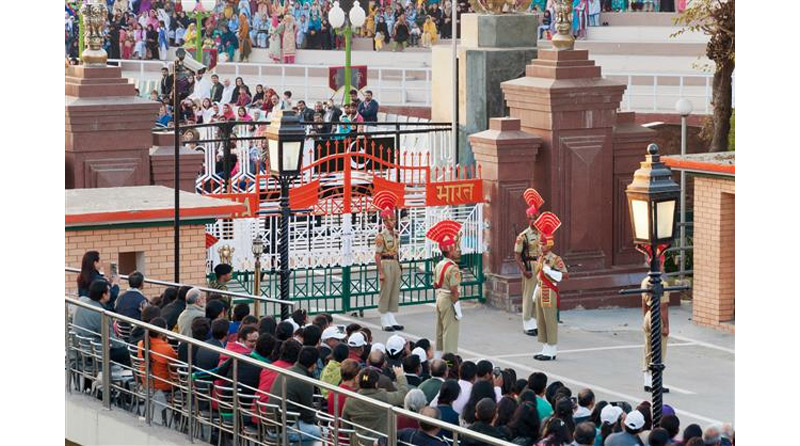 NEW DELHI, Dec 6:
Visitors planning to witness the daily national flag lowering and retreat ceremony at the Attari-Wagah front along the India-Pakistan International Border in Punjab can book their seats online from the next year.
The Border Security Force (BSF), that guards the frontier and conducts the event, has launched a web portal for this purpose — http://attari.Bsf.Gov.In.
“Welcome to JCP Attari website Bookings to view the Joint Retreat Ceremony can now be made online. Bookings Open from 1st January 2023,” the BSF said in a public message on its Twitter handle.
At per the present system, people reach the retreat area without a prior booking and the BSF allows them to take seats in the gallery on production of an ID card.
The new facility is not chargeable and visitors will be initially allowed to book 12 persons in one group, 48 hours prior to the desired day, after furnishing photo ID card details online, a senior BSF officer said.
The booking details will be sent through an SMS on the mobile number of the group leader or the first visitor listed, he said.
The Attari border front, also called the joint check post or JCP, is located about 26 kms from Amritsar city and hundreds of domestic visitors, foreign tourists and locals go everyday to watch the daily flag lowering and retreat ceremony conducted in a synchronised fashion by smartly-dressed BSF personnel along with their counterparts Pakistan Rangers, on their side known as Wagah.
A senior officer said the website will start accepting the bookings from January 1 and an individual would be initially able to book for a group of total 12 people, 48 hours prior to the event, that starts between 3:30 pm-4 pm every evening.
The BSF has now numbered the seats in the viewing gallery so that it can hold about 20,000-25,000 visitors daily.
“While the Attari stadia can hold about 25,000 people daily, the rush of visitors on weekends and days of national festivals like Independence Day and Republic Day swells upto as much as 40,000 persons.
“A number of people had to be turned away from the security barrier and hence it was decided by the BSF Punjab frontier that if the seats are numbered and bookings are made online, everyone will get a sure seat and a desired view,” the officer said.
“We will bring changes in the booking procedure after getting the feedback and response of the first few days,” he said.
India and Pakistan have been traditionally hosting the evening flag-lowering ceremonies at the Attari-Wagah border since 1959 and the event is attended by a huge number of people from both the countries on their respective sides. The ceremony lasts between 60-120 minutes.
The BSF conducts the synchronised ceremony in coordination with their counterparts Pakistan Rangers and it involves lowering of the flags of the two countries along with foot stomping manoeuvres of the troops with patriotic songs playing in the background on the either side.
The online booking will also allow the tourists to visit the BSF museum and border pillar no 102 that is erected next to the Attari border gate. (PTI)