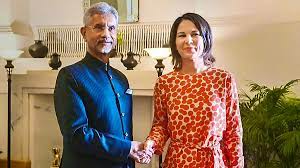 NEW DELHI, Dec 5: India will have a decisive influence in shaping the international order in the 21st century, especially in the Indo-Pacific, German Foreign Minister Annalena Baerbock said as she kicked off her two-day visit to the national capital on Monday.
Baerbock also described as “impressive” India managing to lift more than 400 million people out of absolute poverty in the last 15 years, and said, “It shows that social plurality, freedom, and democracy are a motor for economic development, peace, and stability.”
“Working on this together with strengthening human rights is also our task,” she said in a statement on her visit to India.
The German foreign minister arrived here this morning and is scheduled to hold wide-ranging talks with her Indian counterpart S Jaishankar.
“That we want to strengthen our economic, climate and security policy cooperation with India beyond our strategic partnership, are not empty words,” she said while calling India a natural partner of Germany.
Baerbock said both sides will also sign a mobility agreement “that will make it easier for our people to study, do research and work in each other’s country.”
The German foreign minister also appreciated India’s role in helping the G20 at its summit in Bali last month to take a “clearer” position against the Russian war of aggression in Ukraine.
“Visiting India is like visiting a sixth of the world. As early as next year, India will overtake China as the most populous country in the world,” she noted.
“There is no doubt that India will have a decisive influence on shaping the international order in the 21st century — in the Indo-Pacific and beyond,” she said.
“And the fact that India has managed to lift more than 400 million people — almost as many as people in the EU — out of absolute poverty in the last 15 years, is impressive,” Baerbock said.
The German foreign minister lauded India’s role at the recent Bali summit.
“At the G20 summit in Bali, India showed that it is ready to play its role globally. The clearer positioning of the G20 against the Russian war of aggression in Ukraine is ultimately also thanks to India,” she said.
“As an emerging economic power and a solid democracy, India is both a role model and a bridge for many countries in the world, despite all the internal social challenges. And a natural partner of Germany,” she said.
The German foreign minister noted that the Indian government has set itself ambitious goals not only in the G20 but also at home for its own people.
“When it comes to expanding renewable energies, India wants to push ahead with the energy transition more than before. Germany stands by India’s side,” she said.
“Because the dramatic effects of the climate crisis affect us all, destroying livelihoods in Europe as well as in India,” Baerbock added.
In a tweet, External Affairs Ministry Spokesperson Arindam Bagchi welcomed her to India.
“A warm welcome to German Foreign Minister @ABaerbock as she arrives in New Delhi on her first official visit. An opportunity to exchange views on regional & global developments and review the progress achieved in the India-Germany Strategic Partnership,” he said.
The German foreign minister also visited Rajghat and paid respects to the Father of the Nation. (PTI)