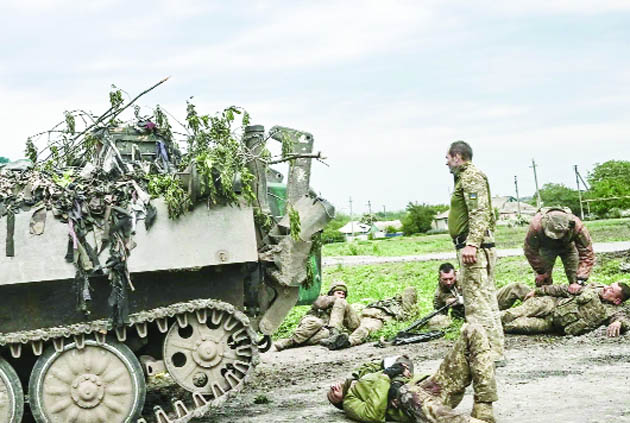 J L Koul Jalali
Ukraine war that started in February this year has already resulted in far reaching consequences for world peace, stability and security. Whole world stands witness to horrible atrocities being perpetrated on people in Ukraine but to no avail. It has already resulted in enormous human misery and mass displacements.These are bound to increase during the ensuing winter season because of disruption in energy,food and even drinking water supplies.Though attempts have been made and are underway at different levels and in different fora to change the situation but there have been no tangible results so far. Some favourable atmosphere has been created for smoothing geopolitical factors behind the war,but geopolitics itself still continues to be under regression with horrible impact on people of Ukraine and immense problems throughout the world.
War in Ukraine has even thrown security of the planet into jeopardy. In August this year Russia prevented adoption of a joint declaration at the end of four week UN conference to review the nuclear non-proliferation treaty. It did not approve of what it termed as political aspects of the text of the declaration. The near universal nuclear non-proliferation treaty with one hundred ninety one states as parties was extended indefinitely in 1995 and is reviewed every five years. It aims to prevent spread of nuclear weapons,promote complete disarmament and encourage co-operation in the peaceful uses of energy. Russia was opposed in particular to the paragraph in the declaration concerning the Ukranian power plant in Zaporizhzhia which is occupied by Russian army. The declaration expressed concern over military activities around Ukranian power plants with negative impact on safety. Earlier various nuclear arms limitation treaties between USA and Russia except one such treaty were allowed to lapse. This almost washed away the good work done during last over five decades towards disarmament and final elimination of nuclear weapons. The lone existing crucial nuclear arms control treaty was to expire on 5th February,2021 but was extended until 2026. Its demise would have ended all limits on deployment of strategic nuclear war heads and delivery systems by USA and Russia. The treaty had got paused owing to Covid-19. But now Russia has postponed talks to shore up the treaty. The whole world has been exposed further to nuclear threat.
Ukraine war was also under focus at the G-20 Summit held at Bali island of Indonesia during last month. It was the first meeting of the grouping since Russia sent its forces in Ukraine in February. Most members strongly condemned the war in Ukraine and stressed that it is causing immense human suffering. In its joint declaration G-20 leaders voiced their serious concern about worldwide economic difficulties and insecurity and termed the threat of using nuclear weapons in the war as inadmissible. The joint declaration expressed serious concern that the war is exacerbating existing fragilities in global economy,constraining growth,heightening energy and food security and elevating financial stability risks. Leaders of the G-20 grouping said it was essential to uphold international law and the multilateral system as today`s era must not be of war.
Addressing the Summit Prime Minister Narendra Modi said “I have repeatedly told that we have to find a way to return to the path of ceasefire and diplomacy in Ukraine”.Observing that world leaders had made a serious effort to follow the path of peace after world war two he added “Now it is our turn. The onus of creating a new world order for the post-Covid period lies on our shoulders. The need of the hour is to show concrete and collective resolve to ensure peace,harmony and security in the world. G-20 should not hesitate to acknowledge that multilateral institutions such as the UN have been unsuccessful in dealing with the global problems associated with climate change,the Covid 19 pandemic and the developments in Ukraine adding that we have all failed in making suitable reforms in the multilateral institutions.”
Taking cognisance of the present somewhat regressive phase of geo-political development, world leaders need to draw suitable lessons from the Cuban Missile crisis of 1962 which is considered the most dangerous crisis in recorded human history. The crisis erupted sixty two years ago in October,1962 when it came to light that erstwhile Soviet Union had secretly placed missiles in a base in Cuba. What occurred later during the thirteen day crisis with John F Kennedy at the helm in USA and Nikita Khrushchev in the ersthwhile Soviet Union, has a lesson for the world as to how it was saved from blowing up. US officials were aware where the missiles and the launchers were but were not sure whether the nuclear war heads had reached Cuba. To put it in the few words,had JFK bombed the missile sites instead of using naval blockades and creative diplomacy he might have unleashed what he was trying to prevent.
The thirteen day crisis ended when Khrushchev withdrew the missiles after JFK had admitted that Bay of Pigs was a mistake and repeatedly promised that Cuba will not be invaded. He secretly also promised that USA will withdraw its missiles from Turkey. Later after about eight months,John F Kennedy revealed in a speech that the crisis had convinced him that the entire cold war must be rethought. Much later in 1987 the same spirit prevailed when the then US President Ronald Reagan and Soviet leader Michael Gorbachev signed the Intermediate Range Nuclear Forces Treaty which could well have been precursor to complete nuclear disarmament.
(The author is former IIS Officer, freelance journalist/Producer)