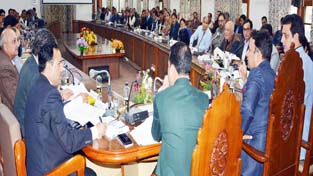 Excelsior Correspondent
SRINAGAR, May 8: Minister for School Education, Hajj and Auqaf and Tribal Affairs, Chowdhary Zulfkar Ali today asked education officers to work tirelessly for upgrading State’s education sector.
The Minister convened a high-level meeting to review the functioning of the Education Department across the State.
“We all must take an oath to work for bringing vibrancy into the education system of the State. It is only possible when the education officers, especially Chief Education Officers will start working on the ground,” the Minister said.
“There is a greater need to delink academics from the administration. Teaching is a respected profession and we must work to bring all he positive changes in our education system,” he said.
The Minister was flanked by Minister of State for School Education, Shakti Raj Parihar, Secretary Education, Farooq Shah among others. The meeting was also attended by the Director School Education, Kashmir, Director School Education, Jammu, Mission Director RAMSA, Director Sarva Shiksha Abhiyan (SSA) Officials from JKBOSE, SIE and other administrative departments.
The Minister while interacting with the officers called for timeline completion of infrastructure works and effective interventions under SSA and RMSA to bring down dropout rate in the Government schools. He also directed for holding remedial classes to compensate loss of studies due to certain reasons.
He took detailed review of the department, saying that education could contribute for the oversell welfare of the State. It was informed that the department has mooted proposal for up-gradation of accommodation of various Higher Secondary and High Schools.
Highlighting the importance of school education, the Minister said that there is strong need to work towards realization of the fundamental objective of making Government schools as hub of modern education centres.
The Minister reiterated the Government’s resolve to meet bare minimum educational requirements including infrastructure and staff in all the Government schools. He said that Government had prioritized education with the launch of numerous reformative measures in this regard.
He emphasized the need for involving all stakeholders, including parents, teachers and local legislators, in further streamlining of the vital sector on which the onus of building a strong and developed nation lies.
The Minister stressed the importance of regular and effective monitoring of functioning of the schools, especially in rural and hilly areas, for better outcome.
He exhorted the officers to ensure that all these centres of learning were equipped with enhanced basic facilities besides a good sports infrastructure to enable overall development of students. “There is a need of collective efforts and a well-knit strategy to further add to the standards of curricular and extracurricular activities, especially in rural areas,” he said.
Later, the Minister released Education Planner, (Educause) and newsletter of the department.