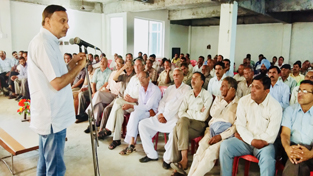 Excelsior Correspondent
JAMMU, May 8:  Senior vice  president of Pradesh Congress Committee  and former minister, Sham Lal Sharma today claimed that granting amnesty to stone- pelters and rehabilitation of surrendered militants has proved as suicidal move of  the BJP-PDP regime in the State.
Addressing a meeting of Block Congress activists at Akhnoor today, Sharma expressed  anguish over the pelting of stones on tourists and  school busses resulting in death of one of the tourists. He further said that the possibility of the involvement of stone- pelters in this case to whom the amnesty has been granted, cannot be ruled out.
Terming the move of the Government `as suicidal’,  Sham Sharma said that granting the amnesty by BJP-PDP Government to these stone pelters has not helped in bringing normalcy in Kashmir, instead it deteriorated further.
The PCC leader said that the present Government has failed on all fronts to provide basic requirements to the people. Incentives as well as amnesty announced by PDP-BJP Government for the stone-pelters are responsible for the ongoing bloodshed and violence in the Kashmir valley. He expressed his surprise that the BJP which was in the forefront during Amarnath agitation, had promised a number of times, that cases of 2008 agitation would be withdrawn but after attaining power, BJP has forgotten such promises.  While as number of youth have been facing criminal cases for their alleged participation in the 2008 Amarnath agitation, traders and business community were also not compensated as per the promises repeatedly made by the self-styled “pro-Jammu” BJP.
Sharma alleged that  BJP Government  in Centre and `Coalition’ in State have  proved failures both in internal and external security. He said that under BJP regime, country witnessed several terror attacks, including Gurdaspur, BSF Convoy Udhampur, Airbase Pathankot, Army and CRPF Convoy at Srinagar and Pampore, Army Base URI, RR Camp Baramulla, Nagrota, Samba, Akhnoor and Army camp Kupwara.
He said that BJP only indulges in chest thumping while our jawans are getting martyred, our borders are disturbed and internal security is in alarming situation. He  said that the Jammu region had been peaceful but the `BJP-PDP’ is trying to create Valley like situation in Jammu with a view to divide the sections of the people and divert their attention from the main issues.